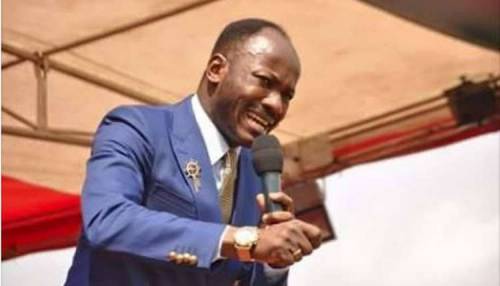 The media space caught fire recently when it was revealed that some gunmen on Friday attacked the convoy of the President, Omega Fire Ministries Worldwide, Apostle Johnson Suleman.

He was attacked along Benin–Auchi Road, Edo State by the gunmen who killed three cops and four others.

It was gathered that the cleric returned from a foreign trip and was heading for a destination in the state when the gunmen attacked his convoy.

Suleman’s lawyer, Samuel Amune, who confirmed the attack to Saturday PUNCH, said the cleric just returned from a programme in Tanzania, adding that he escaped death by a whisker.

He said, “He was returning from a journey when some assassins attacked him. Three of his police orderlies, among others, died. He was returning to Auchi when the gunmen attacked him along Sabongida down to the Warake axis and Auchi shares a boundary with Warake. He had passed Warake and was entering the boundaries of Auchi when the attack happened.”

Reacting to the incident in a video posted on his Twitter handle on Friday, Suleman said that he escaped an assassination attempt on his life, noting that seven lives were lost to the attack.

He said, “My car was attacked; they opened fire on my car and kept spraying bullets, my wife and kids were in the escort car in the front. They killed the police; they killed the other people on the other escort car and the buses with us. Seven people moving in the convoy were killed.

“People who did this are expecting me to come out and mention their names so they can come out and deny, I won’t do that. The truth of the matter is, you can’t kill me, my life is in the hand of God, I’m a man of God.’’

Commenting on the incident, a security expert, Dickson Osajie, condemned the lack of security in the state, especially as the attack happened in broad daylight.

He said, “They attacked him (Suleman); seven people were killed. The country is not safe. How can people move around with guns on the expressway and they are not detected? It is a disturbing situation.”

Contacted for his reaction on the matter, the state police spokesperson, Chidi Nwabuzor, confirmed the attack.

He said six persons, including policemen and Suleman’s drivers, were killed, adding that efforts were ongoing to locate the whereabouts of the cleric’s domestic worker.

Nwabuzor stated, “The attack is confirmed. It was done around 5pm in Auchi. They travelled from Benin and were already at Auchi when they were given a hot chase and surprisingly they (hoodlums) shot at their vehicles. Three policemen were murdered; two of his drivers were killed; one domestic female worker killed and they are still searching for the other domestic female worker. As we speak, Apostle Johnson Suleman is safe. One of the hoodlums was gunned down and one of the vehicles was recovered.’’