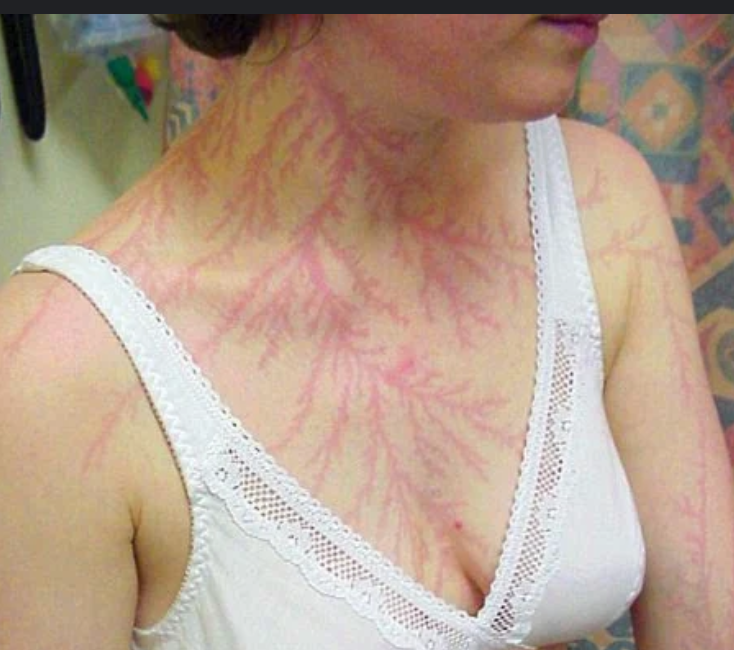 Although it’s rare, with the odds of getting struck in your lifetime being roughly 1 in 12,000, every now and then a human will provide an attractive target for lightning bolts to unleash their power. And of the roughly 500 people who are struck by lightning each year, about 90% survive.

A lot can happen in the three milliseconds it takes for a lightning bolt to course through your body.

As the lightning strikes and then exits your body, it will leave you with deep wounds, often accompanied by third-degree burns. Your hair and clothing might singe or catch fire, worst it can be fatal.

Interestingly, when lightning strikes some people they develop Lichtenberg figures across their skin. For example, a 2000 report from the New England Journal of Medicine described the case of a 54-year-old man who was struck by lightning. He was initially stuporous, but by the time he got to the emergency room he seemed well, and upon further examination, it was discovered that he had a fern-leaf pattern of painless cutaneous marks across his arm, back, and leg. The marks disappeared just two days later.

Lichtenberg figures are branching electric discharges that sometimes appear on the surface or the interior of insulating materials. They are named after the German physicist Georg Christoph Lichtenberg, who originally discovered and studied them. When they were first discovered, it was thought that their characteristic shapes might help to reveal the nature of positive and negative electric “fluids”.

This striking skin pattern, as pictured below, is likely caused by the rupture of capillaries beneath the skin from the electrical discharge. They are sometimes called “lightning flowers” or “skin feathering” but the medical terms are arborescent (tree-like) erythema or keraunographic markings.

Although these marks look pretty damn cool, they are extremely rare, and most people come off much worse when struck by lightning! So don’t try to recreate them at home by shocking yourself.