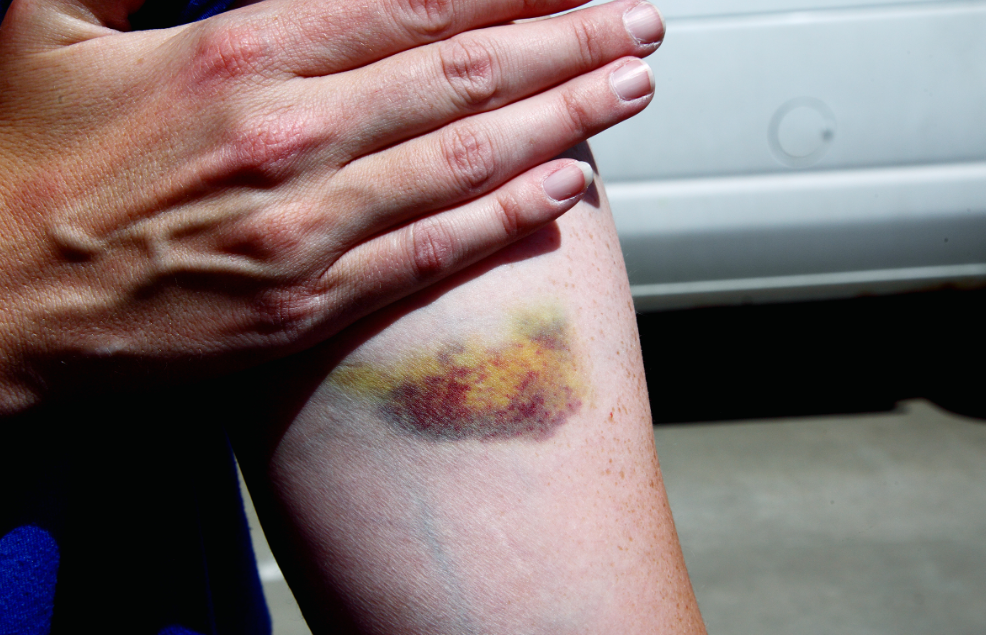 Bruises are part of life. Some are small and tender and some are huge and painful. Either way, they can be annoying — and most of us are happy to see them go.

So, how long must we wait before that bruise is gone? And when should you be concerned about a bruise? Hematologist (blood disease specialist) Dana Angelini, MD, explains how long bruises take to heal and what to do if your bruise won’t go away.

Why we get bruises

Bruises happen when tiny blood vessels under your skin become damaged and bleed. Your skin usually isn’t broken (like with a cut), so the blood stays trapped under your skin. You might get a bruise after you:

How long do bruises last?

There’s no standard lifespan for bruises. It depends on your body and what caused the bruise. “Big bruises last longer than smaller ones,” says Dr. Angelini. “There’s more blood for your body to clear out, so it takes more time. Bruises last one to three weeks on average, though it’s OK if a bruise lasts a little longer. During the healing process, you might notice the bruise changing colors.”

Can bruises be permanent?

Some bruises seem like they’ll never clear up, but all bruises eventually heal. If you have a bruise that looks like it’s set up permanent residence, a few things could be happening.

Types of bruises and when to worry

Some bruises signal a health condition that needs medical attention. See a provider if you notice:

Frequent bruising without an obvious cause

As you put on your socks, you notice a new black-and-blue mark on your leg. Don’t panic if you occasionally get bruises and don’t know where they came from. But see a healthcare provider if you often get mystery bruises.

In some cases, frequent bruising could be a sign of a blood clotting disorder like hemophilia or von Willebrand disease. And though this is less common, excessive bruising can be a sign of cancer.

Also called hematomas, these large bruises may be a sign of a more serious injury, like a broken bone. They might also signal bleeding inside of your body that needs treatment. Hematomas are more likely to affect people with a blood clotting disorder or who take blood thinners.

Known as petechiae, these mini bruises can appear on your skin, in your mouth or inside of your eyelids. They have many causes, from infections to low platelet levels in your blood. You can also get them from excessive straining, like during childbirth or from forceful coughing.

Bruises that won’t go away — but don’t hurt

Senile purpura is a common cause of painless bruises in older adults. “Years of sun exposure, on the forearms especially, causes the skin to become thin and fragile,” explains Dr. Angelini. “You might bruise from a tiny bump, so the bruises don’t hurt.”

Senile purpura bruises usually take longer to heal, too. It might seem like you have permanent bruises on your arms. But it’s just many bruises happening in a row.

When you’re an ‘easy bruiser’

Maybe you bruise from barely brushing up against a door frame, while your friend can take a major spill and barely bruise. If you bruise easily and don’t know why, talk with your provider.

“There are several reasons why some people seem to bruise easily,” says Dr. Angelini. “It could just seem like you bruise more because of your skin type and color. Lighter skin tones show bruises more easily than darker ones.”

Certain medications and supplements can also cause you to bruise more easily, including:

Getting rid of bruises

Home remedies can relieve painful bruises, but they don’t drastically change the healing time. “Apply ice right after an injury to relieve swelling and pain,” advises Dr. Angelini. “Ice might help a bruise heal slightly faster, but it’s not a miracle cure. And don’t use ice for more than 15 minutes at a time, or you could damage your skin.”

Another tip: Avoid heating pads, saunas and hot baths for the first 48 hours after an injury. Heat can dilate (widen) the blood vessels and make your bruise even larger.

When to be concerned about a bruise

Most of the time, bruises aren’t a reason to worry — even if you don’t remember where they came from. But see your provider if you experience bruising that:

Bruises are usually just a result of daily life. But don’t brush them off if it seems like your bruises never go away. “Tell your provider if you’re seeing bruises regularly,” says Dr. Angelini. “Usually, they can run some tests to rule out any health problems. Or they can change your medication if that’s the cause. Your provider is here to address any health concerns, so don’t be afraid to bring them up. It might give you the peace of mind you need.”

Here Is What To Do if Your Fingernail Gets Bruised

What happens in brain when it becomes too hot? See What Happens