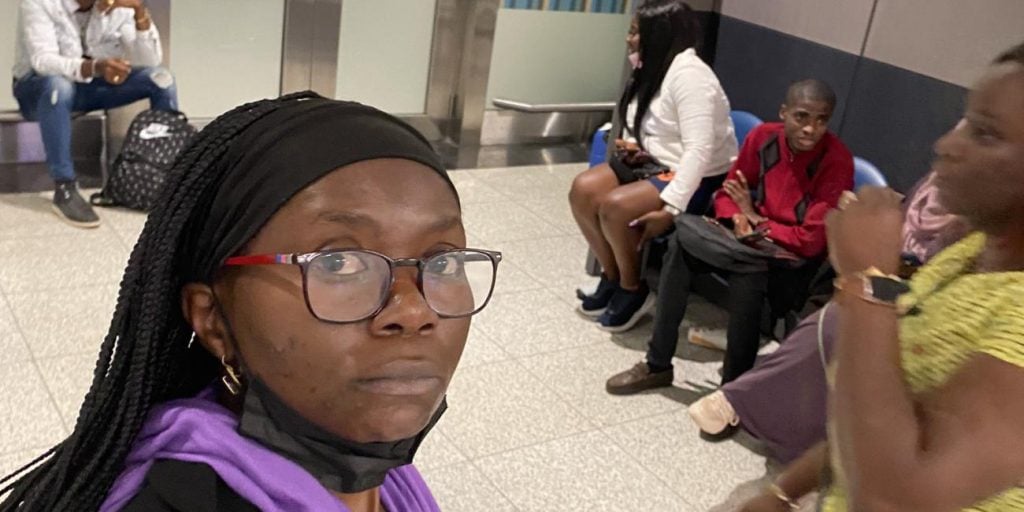 A Nigerian woman, identified as @dunchichi on Twitter, was recently sentenced to one-year jail by United Arab Emirates (UAE) and this has gotten Nigerians enraged.

The woman was sentenced to jail by the UAE government for revealing how Nigerians were reportedly detained for no reason.

She had, on August 31st, posted a picture of how she and other Nigerians with valid visas were reportedly detained at Dubai international airport.

She wrote, “I’m at Dubai international airport and myself and some tiger Nigerians with valid Visas are being held in a room hours after arriving, with no explanation and no information on what we can do. Please help me. There’s more than 20 of us.”

Barely two months later, a user, @jerrydoubles, who claimed to be her relative, on Saturday announced that @dunchichi had been sent to one year jail for an offence relating to her earlier post on Twitter.

He said, “It is sad and regrettably heartrending to tell you all that @dunchichi was sentenced on 12th Oct 22, to 1yr in jail in Dubai. Her family are devastated and Nigeria didn’t save her.”

The UAE government had last week Friday declared a Visa ban on Nigerians, adding that all submitted applications are rejected and fees non-refundable.

Nigerians have now reacted angrily to the development.

Reacting to the incident, Nigerians on social media condemned the maltreatment of Nigerians by the federal government and foreign nations.

@BLOSSOM4GOOD; “Nigerians have been reduced to nothing by international communities courtesy of Abike Dabiri.”

@IsaiahOokonkwo; “This is see finish. They know that Nigeria don’t have leaders. They know how corrupt Nigeria is.”

@daveolu; “That sentencing was at the speed of light. Who represented her?, Mrs Abike should act and act swiftly. This is illegal.”

@MaziChiomaOnuoha; “The tag nigeria to your name brings you immediate disrespect and humiliation. If you doubt me, ask this woman reported in this newspaper.”

@Fidelflex; “This is very sad and unacceptable from the UAE government. She only expressed her displeasure on how Nigerians were being treated and she gets jail term. Nigerian government shouldn’t accept this in anyway otherwise the maltreatment of Nigerians will heightened.”

@Great_Tony1; “Can they try this rubbish with an American citizen? Hell no!! They will even release a press statement and apologize but they are sentencing someone who spoke out.”

Actress, Dorcas Shola Fapson Shades Her Ex-Boyfriend Skiibii After They Broke Up