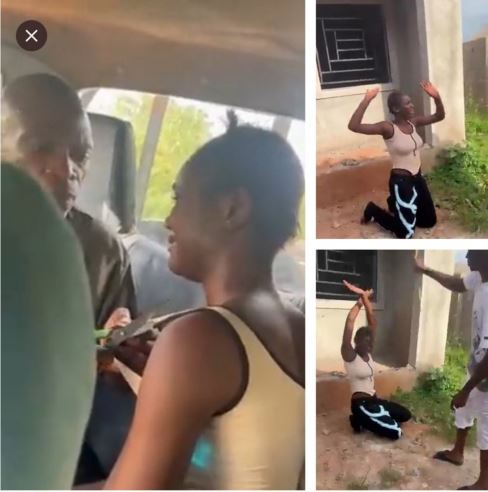 The Nasarawa State Police Command has revealed that it has begun to investigate a recent assault on a young lady.

The police is investigating a case of the physical abuse of the young lady who was seen in viral videos being beaten and having her cloth cut with scissors.

The videos were posted by a tweep, Agatha Akaahar, who revealed that the incident had escalated from a fight between the victim and her friend over a phone number.

It was observed that the video saw the yet-to-be-identified lady being flogged by two men and two ladies, while the recording took place. Her assaulters are said to be a Nigerian lecturer and his children.

In the video, a male voice was heard asking one of the ladies to flog the victim.

It was also observed that the voices in the recording which showed the victim might have assaulted one of the perpetrators before the incident on Saturday.

The victim was later seen inside a car in an unknown bush area.

The man who was suspected to have ordered the assault was seen using a pair of scissors to cut the top worn by the victim, as she was being stripped.

In an update on Saturday, the Police Public Relations Officer in Lagos, Benjamin Hundeyin, revealed that the Nasarawa State Police Command was investigating and would provide details soon.

Giving an update, the Nasarawa Police, in a tweet on Saturday, said, “Sequel to the viral tweet of assault on a female teenager in Lafia, Nasarawa state, the Command swiftly commenced an investigation into the case. It is gratifying to state that, two suspects have been arrested in connection with the case while the vehicle used in conveying the victim to an undisclosed location where she was assaulted has been recovered. Effort is ongoing to arrest the remaining suspects still at-large.”