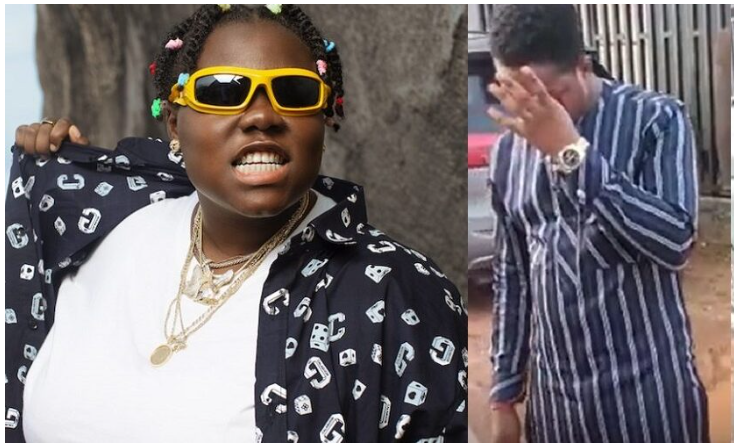 Watch The Moment singer Teni ordering her bouncer to assault a UNIBEN student: Popular Nigerian singer, Teniola Apata, popularly known as Teni, has been accused of ordering an attack on a student at the University of Benin (UNIBEN).

A Twitter user who made this claim on the micro-blogging platform said the incident happened at an event center in Asaba.

According to him, the singer was in Asaba, Delta State for a performance when she allegedly ordered her bouncer to assault the fan.

The Twitter user accompanied the claim with a video showing blood gushing out of the alleged victim’s eye.

He further alleged that police officers who were present at the scene of the incident made no attempt to intervene.

“Teni Makanaki @TeniEntertainer rebuffed my friend’s cheers and instructed her bouncers to assault him. This happened at The Dome Event Centre, Asaba. Police officers witnessed the assault but made no attempt to intervene and the artiste drove off without even one question.” His tweet read.

In other news, the FCT police command has revealed it has commenced an investigation into the allegation made by one Miss Ugwoegbu Ugomwa, claiming one of its officers, DSP Jude Ifeanyi, attached to the State Criminal Investigation Department (SCID) of the FCT Police Command, attempted to rape her in their office.

In a video shared online, Miss Ugomwa claimed Jude lured her to his office and asked her to follow him so he can ease himself. She revealed that when they got there, he attempted to rape her. She alleged that while defending herself, he pushed her from the staircase and she injured herself.

Adeh revealed that while an internal investigation for necessary disciplinary actions has been instituted against the erring Officer, it is important to state that Ugomwa was at the Command’s SCID earlier that day, to report a case of Blackmail, Threat, Defamation of character and sexual Harassment and sundry offenses against another person and had lauded the investigation approach of the Officers.