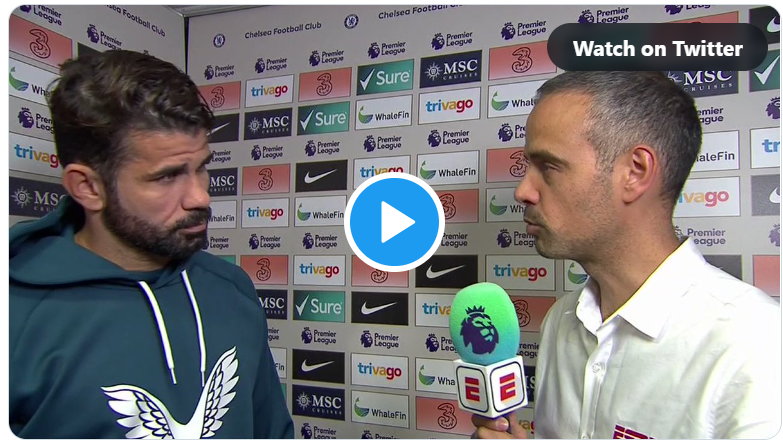 The 34-year-old has joined the Molineux outfit until the end of the season and it seems that the Spanish international has now taken a swipe at his former manager Antonio Conte.

Costa played under the Italian during their time together at Stamford Bridge and Conte was responsible for the striker’s abrupt departure.

Back in 2017, Conte informed the player via a text message that he is no longer a part of his first-team plans at Stamford Bridge and he is free to move to other clubs. The gesture from Conte soured relations between the two.

Costa had established himself as a major fan favourite during his time at Stamford Bridge and he helped the club win two Premier League titles and other domestic cups.

The player recently returned to face the Blues and he took a dig at Conte during the post-match presser.

Speaking to the media after the 3-0 defeat against Chelsea, Costa revealed that he has a lot of admiration for Chelsea supporters who have always shown him a lot of love and respect.

However, he mentioned that Conte was the reason behind his departure and he has no animosity whatsoever towards the Stamford Bridge faithful.

Speaking on his exit from the club, Costa added (h/t Football London): “It wasn’t the fans. It was with that coach [Conte]. I had a very good relationship with the Chelsea fans. I was a champion! It was in the year that we won the second title. He didn’t count on me as much and I couldn’t stay.

“The affection I received today shows that I was never fighting with the fans. But I had to leave. It wasn’t my issue. It was because of the coach at that moment. Today is proof that the crowd has always been by my side and had affection for me.”

It remains to be seen whether Conte, the current Tottenham manager, chooses to respond to Costa’s remarks in the coming days.