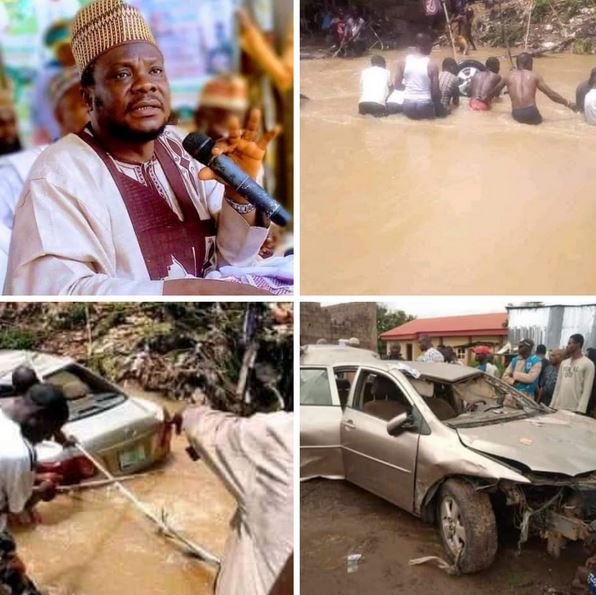 An Islamic cleric identified as Sheikh Abdulganiyu Nuraini aka Alfa Gani Aboto alongside his aides, Alfa Azeez Omoekun and Alfa Nurudeen, have reportedly drowned in a flood in Kwara state.

The cleric and his aides were coming from da’awah activity in Minna, Niger State, when the flood swept away his Toyota Yaris car while trying to cross a bridge near Harmony Estate/Kukende at the Akerebiata area of Ilorin.

The bodies of the victims were recovered by the state fire service from a river opposite Olusola Saraki Abattoir along Sobi Army Barracks road, Ilorin inside the car on Saturday, October 1, 2022.

The late Sheik was a student of late Sheikh Kamaldeen Al-Adabiy, the first Mufti of Ilorin and founder of Ansarul Islam Society of Nigeria. He was also a hafeedh and leading trainer of Quran memorisers in the state.

His corpse was transported to his hometown in Aboto, Asa LGA of the state on Sunday after a janazah in Ilorin.

The state governor in a statement by Rafiu Ajakaye, his Chief Press Secretary, described as shocking and sad the death of the prominent Muslim preacher and his aides.

“We received with shock and sadness the deaths of the popular Islamic cleric Sheikh Aboto and a few others whose identities are not yet known. As faithful, we accept the judgment of our creator. We beseech Him to grant the scholar and others involved al-Jannah Firdaus,” the Governor said in a statement.

“This, indeed, is one sad news too many. The death of Sheikh Abdulganiy Aboto is a huge loss for the Muslim community and to Ilorin as a whole. He was known for his vast knowledge and great efforts in the propagation of Islamic messages in the simplest form possible for his audience.

“We send our heartfelt condolences to the Emir of Ilorin, Dr Ibrahim Sulu-Gambari, the families of the late Sheikh and the others, and the entire Adabiyyah family worldwide. It is our prayer that Allah will grant comfort to all the bereaved families,” the statement added.

Alhaji Sulu-Gambari described Shiekh Aboto’s demise as unfortunate and regrettable stressing that his death has left another vacuum in the dawah activities in the Ilorin Emirate and beyond.

The Emir, in his condolence message issued by his spokesman, Mallam Abdulazeez Arowona, said news of the scholar’s death together with his companions came to him as a rude shock considering the unfortunate incidence of heavy downpour which destroyed the popular bridge linking Kulende and Akerebiata areas. He said;

“During his lifetimes, late Sheikh Aboto touched so many lives through his public lectures along Taiwo road during the month of Ramadan as well as other locations and communities across Nigeria and Africa continent by extension.”

The Emir extended his condolence to the entire Adabiyyah family worldwide, families, associates, natives of the Aboto community in the Asa local government area of the state as well as sympathisers over the death of a pious and highly intellectual scholar.

In his message, the former President of the Senate, Dr Bukola Saraki, said that the demise of Sheikh Abdulganiy Nuraini Aboto Al-Adabby, popularly called Alfa Gani Aboto would create an unfilled gap among the Muslim ummah across the state.

Saraki in a press statement signed by his Press Officer on Home Matters, Abdulganiyu Abdulqadir, described the death of the popular preacher as a great loss to the Muslim Ummah and Ilorin Emirate community in particular.

“The death of Sheikh Aboto, and two others in an auto crash as a result of a heavy downpour in the early hours on Friday, is a great loss to Islam and Ilorin Emirate.

“Sheikh Aboto was a prominent Islamic scholar, preacher and spiritual leader in his own right. He was committed to the development of Islam in the Emirate and beyond. Many will not forget his soft style of preaching and teaching about how to live as a true Muslim.

“The demise of an Islamic Scholar is usually a sad occurrence and this particular one has created a big vacuum that will be very difficult to fill in many years to come. We, however, must take consolation in the fact that the late Sheikh lived a fulfilled, exemplary and pious life worthy of emulation. He will be remembered for this and many other legacies he left behind.

“May Almighty Allah comfort his immediate family, forgive his shortcomings and grant him a place among the righteous ones in Aljanah Firdaus,” Saraki stated.