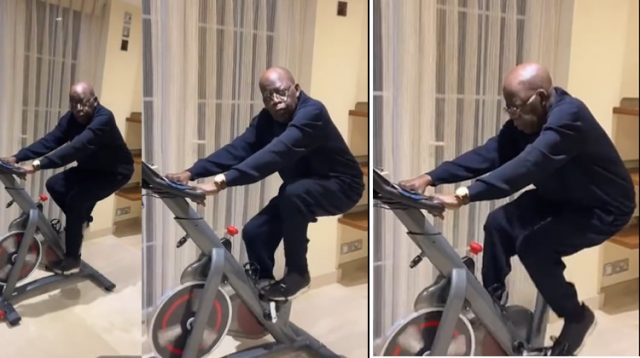 The Deputy National Publicity Secretary of the All Progressive Congress, Hon. Yakubu Ajaka has claimed that his principal, Bola Tinubu is not on medical leave.

According to Ajaka, Asiwaju Bola Tinubu, is in good health and not on a medical trip.

Concerns had been raised about Tinubu’s whereabouts after he failed to turn up for the peace accord signed by presidential candidates in the coming 2023 elections.

On Sunday Tinubu, in a tweet, dismissed claims that he had withdrawn from the 2023 presidential race. The tweet was accompanied by a video showing him working out on a fitness bike.

Honourable Ajaka, who visited the APC standard bearer in London, disclosed in a statement issued Sunday evening that Tinubu was healthy.

He said, “Contrary to the widespread speculation in the public space which was hugely circulated by our political opponents that Senator Bola Ahmed Tinubu was on a medical trip in London. It is totally false.”

The party chieftain said that Tinubu was in the country to meet with different interest groups for the advancement of the country, saying “he is hale and hearty.”

He added that Tinubu was a man of resounding political and administrative experience, who had a sound and vast understanding of Nigeria’s diversity and would deploy this knowledge into leadership when elected.

He stressed that among other things, the APC presidential candidate would deploy his stern desire to unify the nation and inclusion of youths to drive the policy of the country.

Hon. Ajaka added that among those jostling for the role of the President of the Federal Republic of Nigeria at the 2023 general election, the APC’s standard bearer stood tall with a very humbling track record.