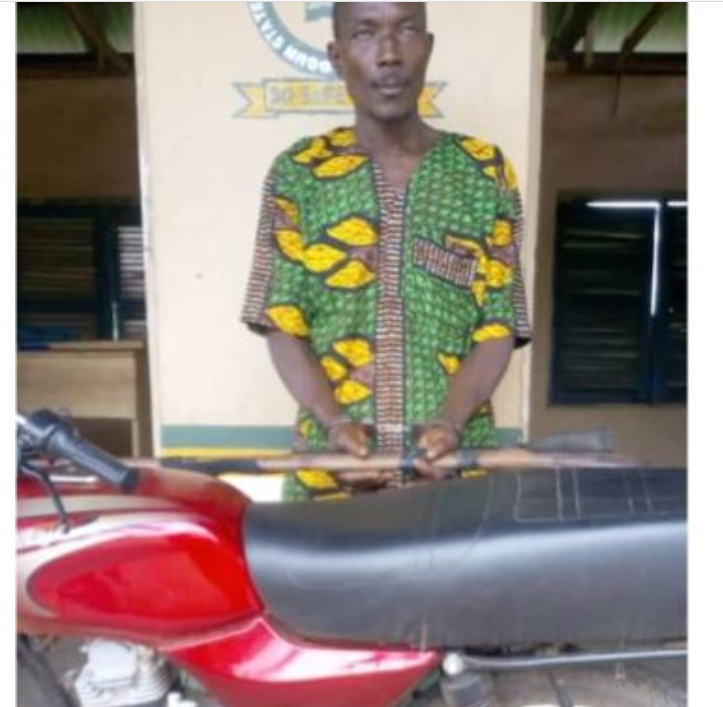 The So-Safe Corps spokesman, Moruf Yusuf, stated this in a statement from the office of the State Commander, Soji Ganzallo.

A suspected armed robber, Mr Oladele Simon, has been arrested by the Ogun State-owned So-Safe Corps.

He was arrested for allegedly snatching a motorbike, otherwise known as okada, at gun point.

The So-Safe Corps spokesman, Moruf Yusuf, stated this in a statement from the office of the State Commander, Soji Ganzallo.

According to Yusuf, at about 3am on Thursday, an okada rider had reported at the Ifonyintedo division of the Corps that his bike had been carted away at gun point.

The case, he said, was immediately transferred to necessary department of the corps.

“Working on the description of the motorcycle and the suspect, the team was able to apprehend the crime suspect, Mr Oladele Simon, a 48-year-old farmer, who resides at Ashipa-Ikorodu in Ipokia Local Government Area,” Yusuf said.

DAILY POST reports that the So-Safe Commander, Ganzallo, has transferred the suspect, the unregistered stolen red Bajaj bike and a locally-made gun to the police in Idiroko for further investigation and likely prosecution.

Meanwhile, Ganzallo has called on okada riders and the passengers to always prioritize their security and safety while on the road.

He charged them to watch out and be vigilant throughout their journey.

The corps commander also advised passengers to pay attention and stop using phones while on bike, saying this will assist in monitoring the riders, in case of any funny behaviour.