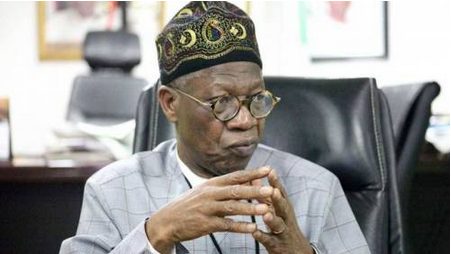 See How Much The Nigerian Government Budgeted To Fight Fake News, Hate Speech, Others:  The minister during the interview stated that fake news and hate speech were being used to wage war against the government and its officials.

The government of Nigeria has reportedly budgeted the sum of N81,677,335 in the 2023 appropriation bill to fight fake news, hate speech and banditry.

Recall that in 2021, the Minister of Information and Culture, Lai Mohammed, in an interview with the News Agency of Nigeria (NAN) had stated that Nigeria had graduated from ordinary fake news to “deep” fake news.

The minister during the interview stated that fake news and hate speech were being used to wage war against the government and its officials.

According to him, at the beginning, purveyors of deep fake news were largely unknown online publications, adding that it was, however, unfortunate that otherwise reputable publications and some mainstream media had joined the bandwagon while adding that citizens found guilty would be sanctioned.

According to PUNCH, an analysis of the 2023 budget showed that the federal government had budgeted the sum of N22,567,865 for “Special enlightenment campaign on government’s programmes and policies, testimonial series to gauge impact of government policies on the citizenry. Advocacy against fake news, hate speech, farmers-herders clashes, banditry, rape, etc.”

Also, the sum of N18,654,780 has been budgeted for “Quarterly interaction with foreign media, PR lobby.”

The analysis further revealed that the government budgeted a total sum of N24,000,000 for the production of 2024 Federal Government wall calendar.

Furthermore, a total of N16,454,690 has been budgeted for “Institutional interactions with stakeholders such as bloggers, online publications, Nigeria Union of Journalists among others.”

SaharaReporters on Friday reported that President Muhammadu Buhari presented the 2023 appropriation bill before the National Assembly in Abuja with a proposed sum of N20. 51 trillion for the fiscal year.

Like Loading...
Related Topics:Hate SpeechOthersSee How Much The Nigerian Government Budgeted To Fight Fake News
Up Next

Check Out Photos As Flood Sweeps The Community Of Delta State