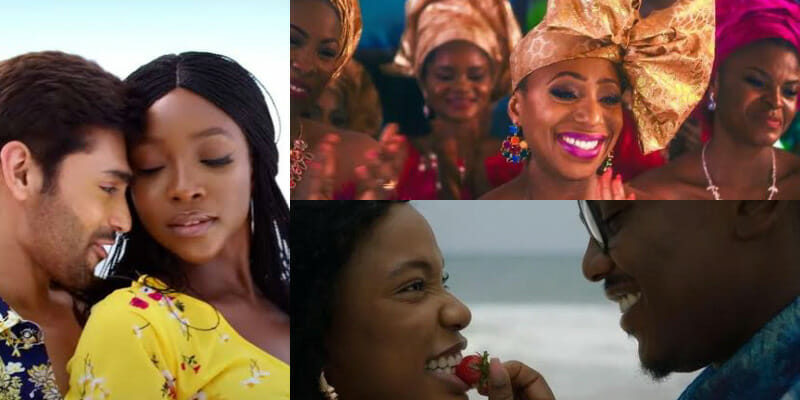 There is a huge audience for romance dramas in Nollywood, and over the years, we have seen many attempt it. While some try to infuse other genres like comedy, action, and thriller into it, some choose to go with the core romance in their movies.

We cannot categorically say all romance movies do not have an element of other genres, but we are talking about the films that are so obvious about what they are about—the ones where we can see and smell the romance from miles away.

These films are the type that leaves us with the ‘awwwwwn’ even before we get halfway into it. Sometimes, we end up unsatisfied because of the cliche storyline, and at other times, we are left with our minds blown because the stories are brilliant and simply too amazing to find a fault.

In this article, we highlight 5 amazing Nollywood romance films with stories that will blow your mind as they did ours too.

Isoken follows the story of a woman whose family is worried about her current state because she is unmarried. This film uses the African element of putting pressure on women because of marriage. Tired of her family’s constant pressure, she is torn between two men, unsure who to pick.

The film, which stars Dakore Akande, Joseph Benjamin, Marc Rhys, Funke Akindele, Lydia Forson, Jemima Osunde, and Damilola Adegbite, is a look at cultural stereotypes and family pressures through the lens of marriage and love.

Isoken was produced by Tribe85 Productions and distributed in Nigeria by Silverbird Distributions and in the United Kingdom by Evrit Film.

The cross-cultural movie with the title translation saying ‘Hello Trouble’ follows the story of two lovers from different cultural backgrounds, Nigeria and India. Namaste Wahala shows how the couple scaled their family pressures as well as societal challenges. This story is the first major collaboration between Nollywood and Bollywood.

Hamisha Daryani Ahuja produced and directed the film which was shot in Lagos.

The film was produced by Forever 7 Entertainment in 2020 and is now available on Netflix.

This film follows the story of a young woman who made the decision to change her behavior in an effort to win back her ex-boyfriend. Instead, in an attempt to change, she finds herself overcome by romance, falling into a relationship with her longtime best friend.

Kambili: The Whole 30 Yards was written by Ozioma Ogbaji and directed by Kayode Kasum, casting Uzor Arukwe, Toyin Abraham, Venita Akpofure, and Mawuli Gavor in supporting roles in addition to Nancy Isime and Jide Kene Achufusi in the lead roles.

The Order Of Things

The film follows the story of a young man who was ready to get married to his girlfriend but has to deal with his mother who clings to the societal norm of hierarchy, insisting that his elder must get married first even though he was not ready for marriage.

The feature-length film was jointly produced by Sid’s Zero Gravity and Filmone Entertainment. It was released earlier this year and the cast includes Lilian Afegbai, Lateef Adedimeji, Ademola Adedoyin, and Iremide Adeoye.

Generally, Nollywood has improved in all aspects. The production is top notch now, but most importantly, the storyline wows us. Gradually, we are starting to see many romance movies with brilliant stories that reflect the Nigerian and African realities and we want to continue to see more of it.

If you are looking for a romantic movie to see with your partner this weekend, the films above will serve its purpose. While they are all entertaining, they also teach important lessons.