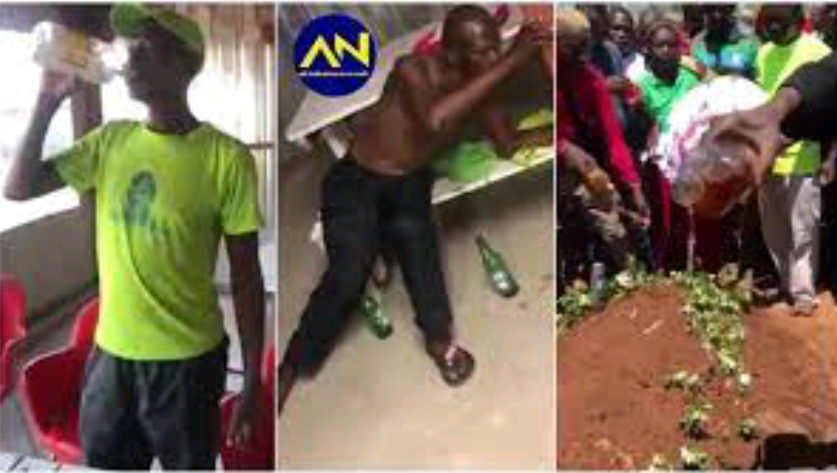 A 37-year-old man, Kwaku Yayente, died unexpectedly at Kansakrom, a suburb of Atwima Mponua District in Ghana’s Ashanti region, as a result of heavy alcohol consumption.

In a conversation with GhanaWeb’s journalist, Mr. Aguuri, an eyewitness, claimed that the late Yayente had been an alcoholic for many years.

According to him, the deceased’s family attempted everything possible to keep him from drinking, but all efforts were unsuccessful.

Mr. Kwame Nyamekye aka Last Doctor, a senior mortuary attendant, also told GhanaWeb that he was at the morgue when a family member and three (3) police officers arrived with the body.

The family revealed to him that their late relative’s tummy was inflated owing to heavy drinking, according to him.

“Unfortunately for them, they heard a burst inside his room and discovered that his stomach had blown, with his intestines flowing out.”

“He didn’t die right away, so they hurried him to the Bibiani hospital here, but he was confirmed dead upon arrival,” he explained.

According to him, the family also informed him that their relative had been sick for several days owing to intoxication. “I’m reliably aware he drinks every day, and he drunk even before his death this morning,” he concluded.

When I Saw Her Scar, I Had To Ask What Happened. Her Answer Had My Jaw On The Floor

Gov Umahi Distances Self From Video Of Soldiers Flogging Civil Servants, Says It Was Doctored