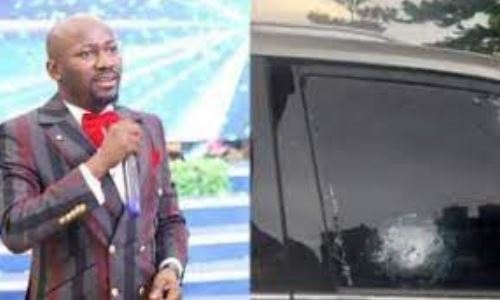 The Rule Of Law And Accountability Advocacy Centre (RULAAC), a civic organisation, has reacted to the attack on Apostle Johnson Suleman.

The group condemned the killing of a man suspected to be among the gunmen that attacked Suleman’s convoy on Friday in Edo State.

RULAAC, in a statement released by its Executive Director, Okechukwu Nwanguma, claimed that the deceased was arrested by a group of vigilantes who handed him over to the Nigeria Police Force for further investigation on the matter.

The group, therefore, described the killing as unprofessional and a breach of ethical codes guiding operatives of Nigerian Police Force.

“Reports have it that seven persons including three policemen and four domestic staff of Apostle Johnson Suleman were killed late Friday near Auchi at the Water Tank Junction along the Warake -Auchi Road on his way to Auchi returning from a foreign mission.

“Information available to RULAAC indicates that the suspect was apprehended by members of a vigilante group who promptly handed him over to the DPO who extra-judicially executed him.

“Killing the suspect is unprofessional and raises questions about motive. The action destroys evidence by denying the opportunity to interrogate and hear from him about other fleeing members of the criminal gang, their probable motive, their likely sponsors, and other vital information surrounding the crime.

“On taking over the suspect from the vigilante group, the police, without any investigation, extra-judicially executed the suspect, denying him the chance – which he is entitled to under the law – to appear in court where his guilt or otherwise would be established following fair trial.

“Could a DPO have unilaterally taken such extrajudicial and reckless action without reference to the Commissioner of Police?

“It would be expected that a DPO, upon receiving a suspect in such a serious crime, would notify his CP. Did the DPO notify his CP? What directives could the DPO have received from the CP that emboldened him to carry out such a heinous, illegal, and scandalous act?

“If it turns out to be the case that the CP Edo ordered the unlawful killing of the arrested suspect, the CP would be liable for giving an unlawful order. But even if the officer who shot the suspect did so convinced that he was obeying superior orders, he will still be held personally liable because obedience to superior orders is no justification or excuse under the Police Act 2020.

“Such an order would be manifestly unlawful. A prompt, impartial and exhaustive investigation by an impartial team outside Edo Police Command is warranted,” the group added.

Meanwhile, SaharaReporters earlier reported that Apostle Suleman also disputed a police report that claimed one of the gang members who allegedly attacked his convoy yesterday was killed in a shootout with officers along the Auchi expressway in Edo State.

In a tweet he made on Friday night in response to the police’s claim, the cleric disclosed that the suspect was apprehended and handed over to the police at the scene where his convoy was attacked.

He further questioned why the security personnel killed a suspect who might have revealed who was responsible for the horrific attack that happened to him.

Electricity Firm, AEDC Allocates Outrageous Bills To Flood Victims In Kogi State Despite Being Away From Home