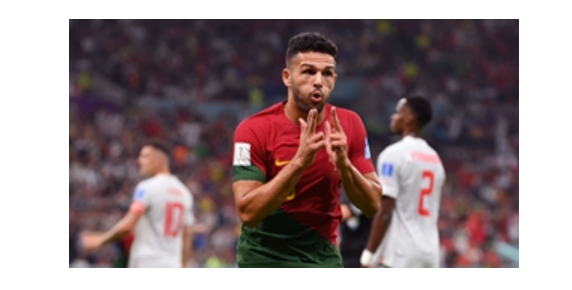 Portugal’s hat-trick hero Goncalo Ramos said he had not even dreamt of starting a World Cup knockout match, let alone scoring three in his first start in the tournament.

Ramos was handed a start ahead of five-times Ballon d’Or winner Cristiano Ronaldo and rewarded coach Fernando Santos with a brilliant match-winning display.

“Not even in my wildest dreams did I think of making my first start in a World Cup knockout game and scoring three goals,” he said.

That’s how you announce yourself on the #FIFAWorldCup stage!

How did that go in?

“But we have to think game by game and prepare for the game (quarterfinal with Morocco. This result doesn’t matter now. We’re going to go all out in the next game.”

The 21-year-old striker was asked how the dressing room – and Ronaldo – had reacted to the surprise team selection from Santos.

“Honestly no one in the team talked about it. Cristiano, as captain did what he does, he helped, he talked to us, not only to myself but to my teammates,” he said.

Ramos said Ronaldo had been an example to him as he grew up.

“Cristiano Ronaldo has always been a role model, he is an idol for many. I also like (Robert) Lewandowski and (Zlatan) Ibrahimovic,” he added.

Portugal are running riot against Switzerland ??: