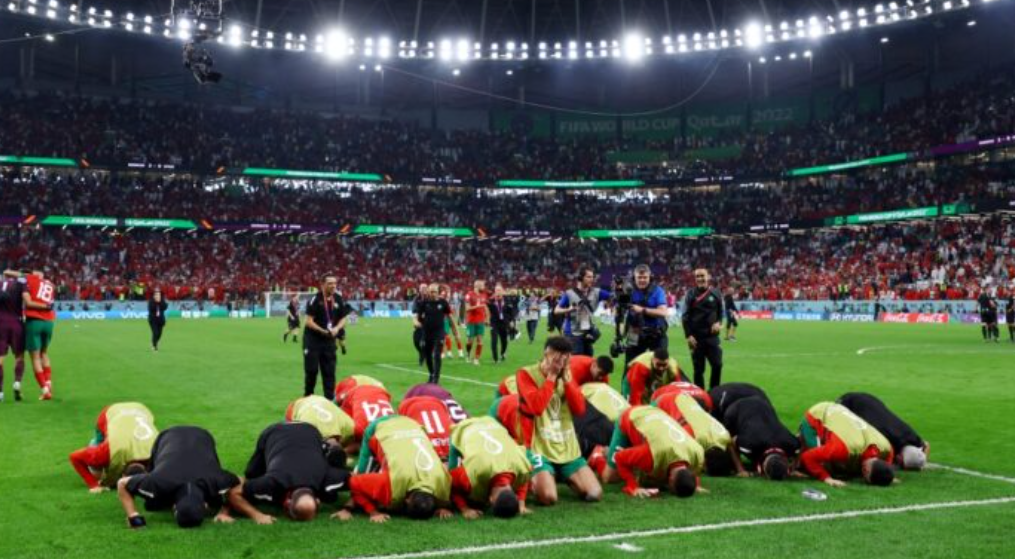 Morocco rode a wave of passionate support and kept the World Cup dreams of the Arab world alive as they eliminated fancied Spain in a penalty shootout on Tuesday to reach the quarterfinals.

In doing so, they became the first Arab nation to advance to the last eight, ensuring a breakthrough for the region in the first global tournament in the Middle East, and also became the fourth African side to go this far in World Cup history.

Their victory will be seen as not only a triumph for Morocco but vindication of the controversial FIFA decision to hand Qatar the hosting rights, adding significant gloss to another Arab success at the tournament like Saudi Arabia beating Argentina and Tunisia upsetting holders France in the group phase.

????Morocco have conceded only ONE goal throughout the 2022 FIFA World Cup after 4 games.

??They drew Croatia and defeated both Belgium and Spain to qualify for their 1st ever World Cup quarterfinal.

Morocco, who edged Spain 3-0 in the shootout after a 0-0 draw at the end of two hours of energy-sapping action, now have a chance to become both the Arab world and Africa’s first-ever semifinalists if they continue to use the overwhelming support that has backed them through an impressive array of results.

They will play on Saturday in the quarterfinal at Doha’s Al Thumama Stadium against either Portugal or Switzerland, who are in action later on Tuesday.

The ear-shattering cacophonic combination of singing, drumming, jeering and whistling from Morocco’s supporters has created an atmosphere like no other in Qatar’s stadiums.

They were again the vast majority in the capacity 44,667 crowd at the Education City Stadium, completely drowning out the Spain fans.

There is no ambiguity about their support as they cheer their team and barrack the opposition in equal measure, and the Moroccan players often turn to them for a lift when needed.

Morocco were happy to allow Spain possession but in the end were desperately hanging on for the shootout as they battled injury and fatigue and lived dangerously in the closing stages.

Spain had a dominant 63% of the possession in the game and, even given the 30 minutes of extra time, made an extraordinary 1 068 passes, 988 of them successfully completed.

??No team has scored a goal against Walid Regragui’s Morocco.

But most of them shuffled from one side to another, rarely producing the penetrative pass Spain were looking for.

Morocco had moments of enterprise on the counter-attack and were carried by the individual efforts of the likes of midfield destroyer Sofyan Amrabat and wing backs Achraf Hakimi and Noussair Mazraoui.

They will however be mightily concerned to have lost centre back Nayef Aguerd, who limped off in tears in the second half, having just made the World Cup after ankle surgery kept him out for most of the season at his new English club West Ham United.

???? What A Proud Moment for Morocco

??1st African country to go through to the quarter finals of the FIFA World Cup since 2010.