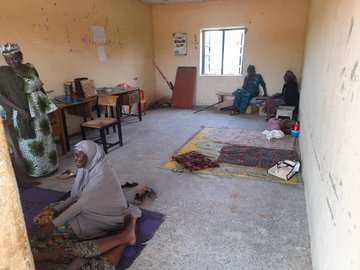 It has been revealed that a secondary school in Adamawa State has become very dilapidated.

The state of Government Secondary School, Federal Housing Estate, Bajabure in the Girei Local Government Area of Adamawa State, has become so disheartening that teachers and pupils have to sit on the bare floor or mats.

TrackaNG, who visited the school located in Yola, the state capital, also revealed that the current condition of the building shared by primary and secondary schools for learning is so terrible that primary 3 class has no teacher while there is no furniture for pupils in primary 1 to 5.

Ahmadu Fintiri is the governor of Adamawa. The presidential candidate of the Peoples Democratic Party (PDP), Atiku Abubakar, a former Vice President, is also from Adamawa.

“We visited the school and discovered the deplorable state of learning, where both primary and secondary schools share the same building for learning in Yola town. The primary school have their classes in the morning while the secondary school does the afternoon session.