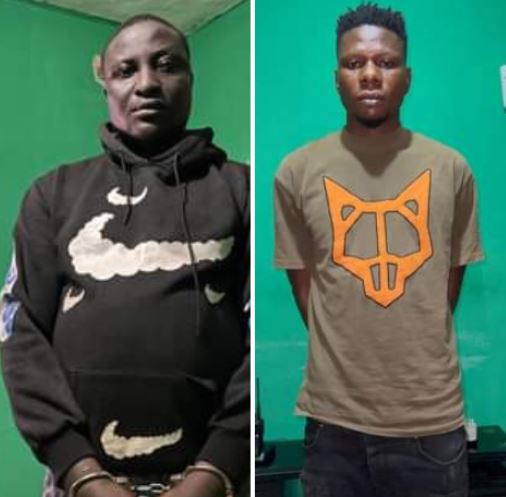 Two criminal suspects identified as Ochuko Newman and Amos Abieyuwa have been arrested by men of the Edo State Police Command in the Ikpoba Okha Local Government Area of the state.

Deputy Spokesperson of the Command, ASP Jennifer Iwegbu, who disclosed this in a statement on Wednesday, October 12, 2022, said the suspects have been on the police wanted list for alleged kidnapping and armed robbery, murder, land grabbing, and other crimes in the state.

“In furtherance of the determination of Edo State Command to take the battle to the den of criminals in the State, Operatives of the Command on 11/10/2022 at about 2210hrs arrested Messrs Amos Abieyuwa ‘M’ 28yrs and Ochuko Newman ‘M’ 24yrs at their hideout in Ulegun community of Ikpoba Okha Local Government Area of Edo State, ho has been on the Command’s wanted list on alleged cases of Kidnapping, Armed robbery, Cultism, Arson, Murder, Gun-running, Land grabbing, Promoting communal war and Levying war against the Edo State Government at Oke-Oroma, Obazagbon and Obagie communities of Edo state, where they played the arrowhead role/ mastermind roles,” the statement read.

“One of the suspects, Ochuko Newman while making his statement confessed that he and Amos Abieyuwa are the arrowheads of Land grabbing, Marine kidnapping, Gun-running, Armed robbery, Arson, Promoting communal war, Levying war against the Edo State Government, and Cultism.

He further confessed that Amos Abieyuwa is in possession and control of two AK-47 rifles as part of the guns they use in their operations. Amos Abieyuwa in his statement confessed and affirmed the confessional statement of Ochuko Newman.

“To this end, the Commissioner of Police Edo State Command, CP Abutu Yaro fdc has given a matching order to the Operatives to go all out and arrest the fleeing suspects and bring them to book. While warning all other persons who are in this enterprise of Violent Landgrabbing, assassination, Marine Kidnapping to renege their trade or leave the State for good, or the efforts of the Command would be impactful on them, the CP urges the good people of the State to remain law abiding as they go about their daily legitimate businesses/activities.”

I Pray You Continue To Find Strength – Hushpuppi’s Friend, Pac, Writes Open Letter To Him Ahead Of Court’s Verdict

Sowore Calls Out NBA For Not Inviting Him To Annual Conference, Mocks Tinubu For Not Attending