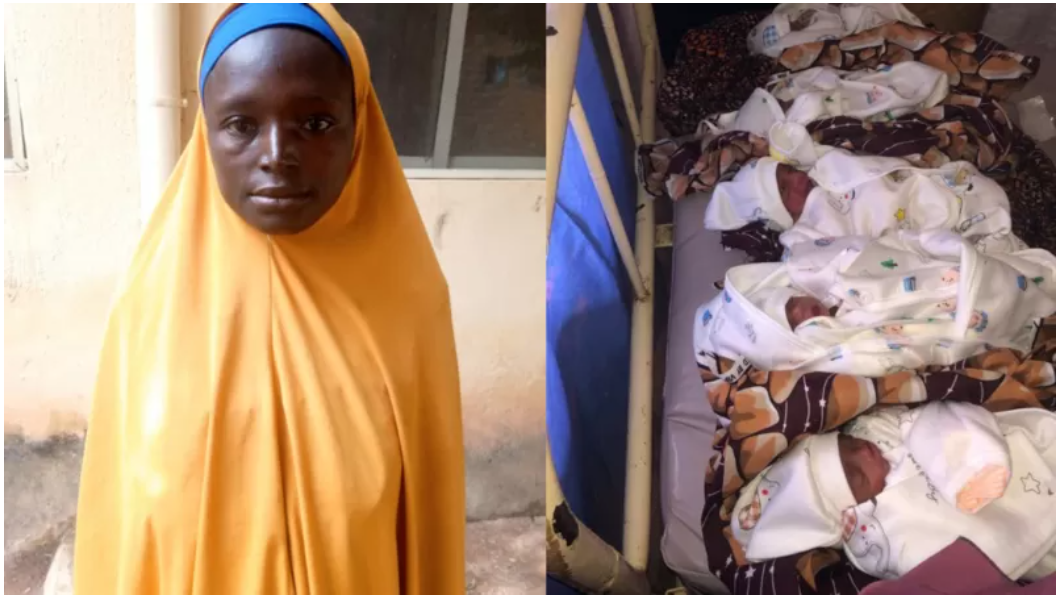 Photos: Nigerian woman with 13 children gives birth to another set of five babies: A Nigerian woman, Hajara Shuaibu, has been dubbed the “most fertile woman in Nigeria” after her latest delivery of five children on Wednesday, October 5.

Hajara, who hails from Katsina State, gained her sobriquet with the new quintuplets who arrived after the previous births of two sets of twins and nine single children.

According to Hajara, who spoke to BBC Pidgin about her experience, she simply followed her normal routine during her pregnancy, as she had no idea she was expecting more than one baby.

She didn’t even go for ante-natal, and she was assisted by the local birth attendants called Unguwan zoma in Hausa. After her delivery, she was moved to Funtua General Hospital as a precaution.

“Na for house I born, na afta dem carry me go hospital wia dem infuse blood for me and tell me to rest, all my previous births too na for house,” she said. “All my children na for house I dey born dem without single operation.”

The woman, who is an ordinary housewife without any business, said she has no diet or routine to explain her mysterious births, and she also called on the government and individuals to come to their aid to help take care of the babies.

Her husband, Shuaibu Umar, said he considers the children as blessings. He also revealed that two of the newborns died on Thursday due to lack of proper care, but the remaining three and the mother are fine after receiving proper care at the Federal Medical Centre, Katsina.

He added that the Chairman of Faskari local government in Katsina had helped them with a donation of N100,000, but they still need help to take care of the large family.

When asked if she would give birth again, Hajara said it was out of her hand.