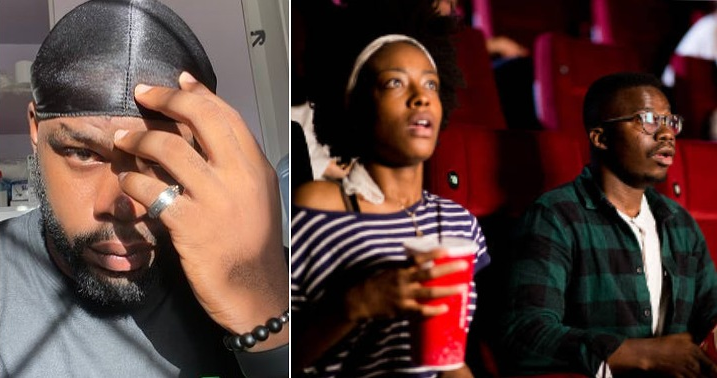 Nigerian Man Stops Couple From Getting Romantic At Cinema – “Not on my watch”: A Nigerian man identified as Mekzy has narrated how he stopped a couple from getting intimate with each other at the cinema.

According to Mekzy, he noticed they were about to start touching themselves and he followed them around to make them feel uncomfortable.

“I went to watch a late night movie at filmhouse in ph. This couple were seated in front of me, being touchy and mushy. After a while, they stood up and went to the back and I joined them too. I knew they wanted to move to the second phase of fornication, but not on my watch.😑

I met them at the car park after the movie and as i was waiting for my bolt ride to arrive, the babe kept looking at me like she wanted to deck me. If eyes could kill, I wouldn’t be here telling this story. I was just doing the lord’s work.🤷🏾‍♂️”, Mekzy narrated.

Like Loading...
Related Topics:Nigerian Man Stops Couple From Getting Romantic At Cinema - “Not on my watch”
Up Next

Police Escorted Man To A POS, Withdrew ₦100k In Lagos – He Explains How He Got His Money Back