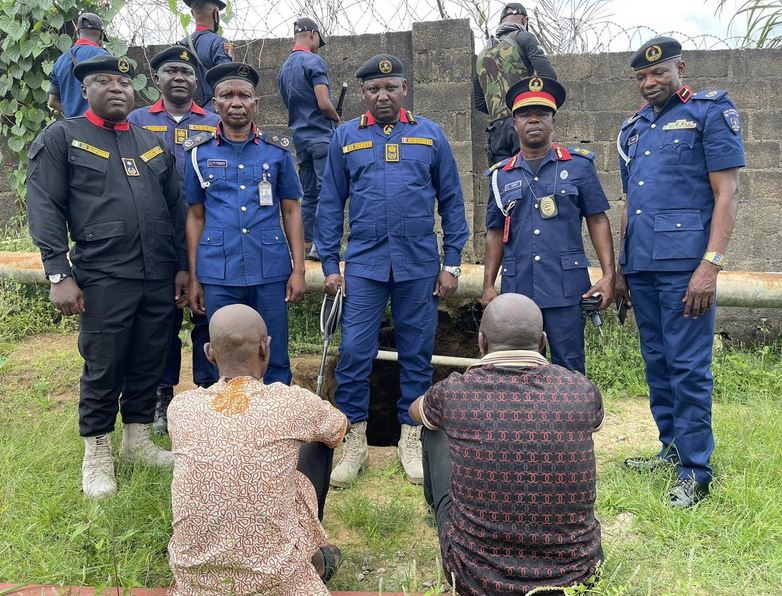 A marine welder identified as Iyamba Edem-Iyamba has been arrested by officials of the Nigeria Security and Civil Defence Corps (NSCDC) Cross River State Command for attempting to vandalize NNPC’s pipeline in Calabar.

Commandant of the Corps in the state, Samuel Fadeyi while parading the suspect before newsmen on Monday, October 3, 2022, said he was arrested by personnel of Corps in Calabar South Local Government Area of the state.

“The attempted vandalism would have facilitated the syphoning of petroleum products into the facility of a company, Mettle Energy and Gas Company, if it had been successful,” Fadeyi said.

“A similar thing happened in the same company in 2020 when one of the company’s tanks was used to syphon petroleum products from the NNPC pipeline. Five persons were convicted then for vandalising the NNPC pipeline and they served their jail term. They forfeited some cars and other property to the Federal Government,’’

He said NSCDC operatives arrested the suspect on September 13, 2022, following cooperation received from the security man of Mettle Energy and Gas Company, Gabriel Ajom, who had earlier been arrested in connection with the crime.

Fadeyi said that on Aug. 26, men of the NSCDC on patrol discovered a tunnel that was being dug from Mettle Energy and Gas Company, leading to the NNPC pipeline at the jetty.

According to the Commandant, Edem-Iyamba is the mastermind of the group that attempted to vandalise the pipeline and breach distribution of petroleum products.

“At first, we arrested the security guard of Mettle Energy and Gas Company who gave us useful information about those that approached him for the illegal deal. The mastermind was hiding, but our men were able to track him to his hideout in Calabar South,’’ he said.

Fadeyi explained that NSCDC’s earlier decision to disband its anti-vandalism team and re-strategise the fight against fuel theft was yielding positive results.

“A few individuals cannot be gaining at the detriment of other Nigerians by sabotaging the economy. All hands are on deck and we are working in synergy with other security agencies to ensure that oil theft and pipeline vandalism are stopped,’’ he said.

According to him, the Commandant General of NSCDC, Dr Ahmed Audi, was so passionate about the fight against illegal oil bunkering, oil theft and pipeline vandalism.

He explained that Audi disbanded the NSCDC anti-vandal team with a view to re-strategise on the fight against oil theft, adding that it has so far yielded positive results.

Fadeyi assured that the suspects would be arraigned at the conclusion of investigation.

The suspect, Edem-Iyamba, who said he was a marine welder, told the News Agency of Nigeria (NAN) that desperation for money lured him into the act.

“I was arrested in connection with an attempt to vandalise the NNPC pipeline. I know what I did was bad; I am pleading with the NSCDC to forgive me, I won’t be involved in this again. We were four in number that dug the tunnel; the three other persons came in from Port Harcourt,’’ he said.