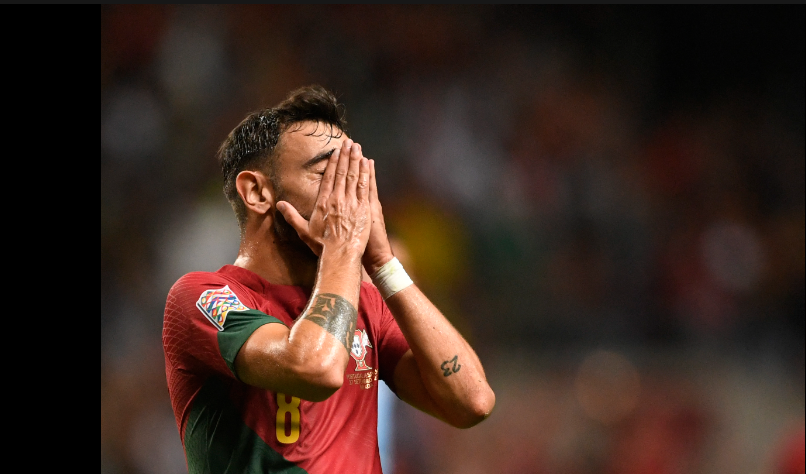 Bruno Fernandes has named the struggling Manchester United star he would deliberately try and wind up in training – as he was desperate to see the player return to his best form.

Fernandes has become something of a talismanic figure at Old Trafford since his £56.7m move in January 2020. Indeed, he has 51 goals in 134 appearances for the Red Devils, sparing them from many a bad situation during that time.

As such, the 28-year-old is often seen as a source of inspiration to many of his teammates. While never officially being named as captain, Fernandes has, on occasions, donned the armband in the absence of Harry Maguire.

To that end, he is often seen cajoling United players to raise their game and keep concentration when it most matters. A captain in all-but name.

And that’s despite bizarre claims from former Man Utd defender Paul Parker, who recently suggested Fernandes ‘should probably have signed for Tottenham instead’.

United managers past and present, though, are all too aware of his value. And some of his best work is often done on the training ground too, away from the watching gaze of the public.

Now, in an interview with Soccer Am, Fernandes has revealed some of his more unorthodox training methods. And it turns out he deliberately attempted to get a rise out of Eric Bailly.

The Ivorian defender signed for United in a £30m deal from Villarreal in summer 2016 and enjoyed an excellent first season at Old Trafford.

However, his form soon faded and he struggled to recapture his best form thereafter.

And while injuries certainly played their part, Fernandes seemingly had a feeling there was an improvement to be made.

To that end, he claims he used to target him in training in an effort to spark a revival.

Revealing his rather unusual techniques, Fernandes stated: “I like to mess with the big ones so you get used to being bullied in the games.

“One of the ones I would always mess about with was Eric Bailly. Always in training, I would play as a 10 and he would play as a centre-back. It was his job to jump on me [keep me quiet]. I was always playing one-touch. He kicked me so many times and every time that I pass the ball to do a one-two he would always put me on the ground.

“He said ‘Every time you get the ball, the first touch, I have to put you on the ground or you will run away from me’. Even on the training ground, I would know he is coming. And instead of moving backwards, I would run forward so he can’t kick me. Sometimes even when he was on the ball and would pass it I would kick him. I’d put him on the ground.”

“It’s the way that the mood – and it depends on the results. If the results are better it’s always easier to joke about. Because when you are not in the mood, even in training sessions, joking like this, kicking someone, can be seen in a different way.”

Bailly would ultimately leave United this summer to join Marseille on a season-long loan. And the defender is starting to recapture his best form again, having played five times so far for OM.

He is unlikely to be seen in a United shirt though again. Indeed, Lisandro Martinez and Raphael Varane are now seemingly established as first choice centre-half pairing. The two men have built up a solid understanding in recent weeks, playing their part in improved form for United.

Indeed, the Red Devils have won five of their last six in all competitions going into Sunday’s Manchester derby. In the process they have also kept three clean sheets, only conceding three goals in that time in total.

Bailly, meanwhile, is out of contract at Old Trafford next summer. His deal with Marseille gives them an option to make his signing permanent, which can be activated at any time.

The 28-year-old made 113 appearances for United over his six seasons at the club, scoring the one goal.