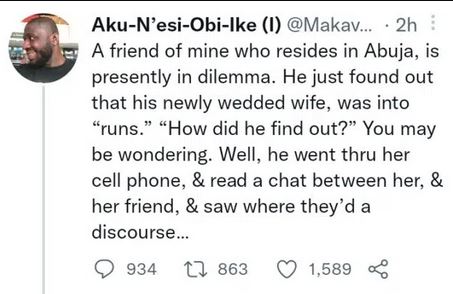 A man has been left traumatized after he found out that his newly wedded wife used to be a runs girl and has had s3xual intercourse with a politician.

According to the Tweep who shared the story, the Abuja-based man had gone through his wife’s phone and had found chats of her and her friend talking about their escapades with clients.

The Twitter user reveals that his friend is considering calling it quits since the marriage is just two weeks old.

“A friend of mine who resides in Abuja, Is presently in dilemma. He just found out that his newly wedded wife, was into “runs.” “How did he find out?” You may be wondering. Well, he went thru her cell phone, & read a chat between her, & her friend, & saw where they’d a discourse…

About a thrreeessome they once had with a white man that works somewhere in Abuja, & also saw another chat where she was discussing with the same friend about an appointment she had at Transcorp Hilton with a politician.

He’s confused as to what to do from here, & also strongly…

Considering calling it quits, given that the marriage is just 2 weeks old. The situation has left him very traumatized. He found out all these yesterday.

He asked me to tweet it, to know what advice you may have for him. He will be reading your comments.

I Was Told I May Never Get Married — Ooni’s Wife, Tobi