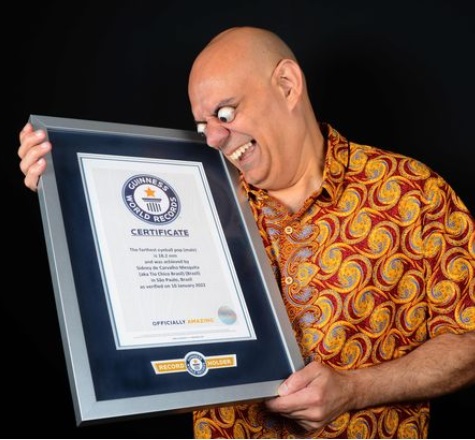 Sidney de Carvalho Mesquita has entered Guinness World Records for being able to push his eyes 1.8cm out of their sockets.

He can perform the unbelievable task using his facial muscles, as officially recorded by an optometrist.

The Brazilian discovered his bizarre biological condition at the young age of nine and has always loved showing off his eye-popping talent to his family and friends.

But it was not until this year that Mr Mesquita officially registered the talent.

His record was verified in Brazil’s Sao Paulo on January 10, 2022, when an optometrist measured his eye protrusion using a device known as a proptometer.

Guinness World Records said he broke the 2007 record of 1.2cm.

Mr Mesquita said he was speechless to learn the news of breaking the record and had never felt “so much happiness, pure excitement mixed with elation and ecstasy.”

Sidney, who performs as an impersonator of the Addams Family character Uncle Fester, briefly loses vision when he pops his eyes and explained the feeling as “letting go of part of my body.”

He has since been able to utilise his strange talent in both personal and professional ways and is hoping to become known for his talents across the globe and not just in Brazil.