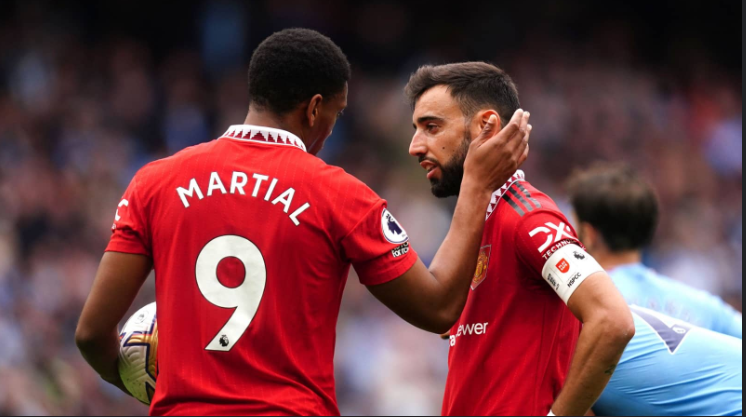 A remarkable report in Spain has claimed both Man Utd and Anthony Martial have determined a transfer away is the best course of action.

The French forward, 26, was given a new lease on life by Erik ten Hag in pre-season. Martial impressed, scoring in each of Manchester United’s first three pre-season clashes against Liverpool, Melbourne Victory and Crystal Palace.

Whether he, Marcus Rashford or Cristiano Ronaldo would start the season up front was a key talking point ahead of the new campaign.

However, Ronaldo was quickly cast aside, while Martial suffered hamstring and Achilles injuries that ensured Rashford got the nod without a challenge.

Martial returned to action in the Manchester derby on Sunday and bagged a late brace to give the 6-3 scoreline an air of respectability.

However, a remarkable report coming out of Spain has claimed that could be one of his final acts at Old Trafford.

Via Caught Offside, it’s claimed LaLiga duo Valencia and Sevilla are ready to pounce and could snap up Martial as early as January.

The Spanish outlet makes a series of eye-catching claims, such as Martial reportedly wanting out in order to relaunch his career elsewhere.

Furthermore, it’s stated Man Utd too have reached a similar conclusion. The idea of a contract extension has now allegedly been ‘discarded’.

Martial’s current deal expires in 2024, though Manchester United do hold an option for a further 12 months.

The report states United want to maximise the sum they could generate. Selling in the next window will allow just that.

Sevilla are described as being ‘on pole’ at present. However, Martial reportedly has reservations after his loan spell in Seville did not convince in the second half of last season.

Will Anthony Martial really be sold?

The Spanish outlet in question are not known for being one of the more reliable transfer news outlets.

What’s more, Martial appeared the favourite to begin the season at centre forward if not for his injury troubles.

He clearly has a fan in Erik ten Hag. His brace off the bench against City will only enhance his standing with the new manager too.

Additionally, Cristiano Ronaldo has been marginalised by Ten Hag who favours a more energetic frontman.

If Ronaldo is allowed to leave in 2023, selling Martial too would make little sense. Losing both would force United into the market for at least two new strikers.

The 6-3 derby defeat showcased just how far United still have to go to catch Man City.

City and the north London pair have all started the season well. Tottenham also tasted derby defeat at the weekend, though Antonio Conte has his Spurs side on a steep upwards trajectory.

Few would be surprised to see City, Arsenal and Tottenham lock up the top three. That could mean only one Champions League place might be up for grabs.

Liverpool have been a lock to qualify for the UCL in recent times. However, Jurgen Klopp’s side have limped out of the gate and have issues all over the park.

Darwin Nunez is struggling to adapt. The midfield, meanwhile, has been allowed to rot and is in desperate need of investment.

Adding to their issues is the fact every one of their defenders are performing well below their usual standards. Trent Alexander-Arnold and Virgil van Dijk in particular look well off the boil.

The race for fourth spot looks like it’ll therefore be contested between Man Utd, Chelsea and Liverpool.

With Ronaldo out of favour, Martial will have a big role to play in the remainder of the campaign and the onus will be on Ten Hag to finally unlock the potential we all know he has.