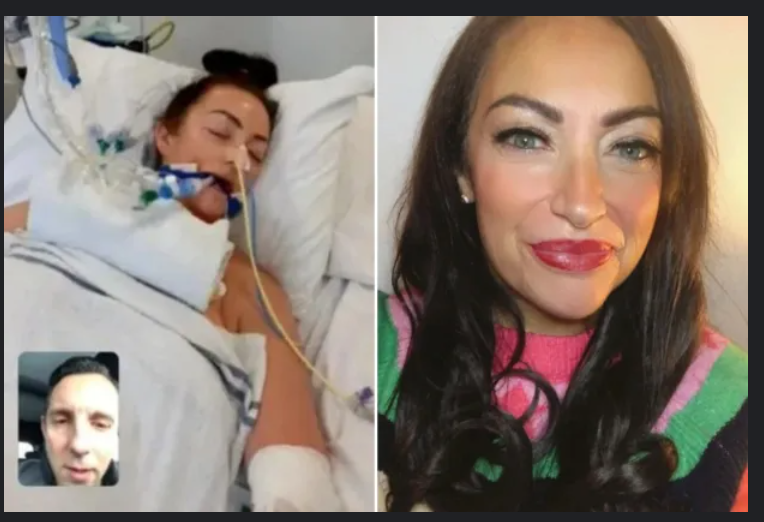 SIGNING off work one weekend, mum Kirsty Bortoft had been looking forward to a night in with her partner Stu.

The mum-of-three recalls her dad offering to cook pizza for her three sons so the couple could have some time together.

She was rushed to hospital where she was then placed in an induced coma. While she was there, Stu video called her in order to urge her to get betterCredit: Jam PressNow the couple have revealed their experience after Kirsty said ‘something magical’ happened when she was in a comaCredit: Jam Press

Now, telling her story, the anxiety coach from North Yorkshire has revealed that she died for 40 minutes – with medics desperately trying to save her life.

On January 29, last year the meditation teacher said her partner found her unresponsive in her living room.

She was sitting on the sofa, eyes open and “lifeless” – and alleges her fiancé said her skin had “strange” hexagonal patterns all over.

Soon, she was rushed to hospital as she had stopped breathing, and medics said she had just a six per cent chance of survival.

Kirsty had a cardiac arrest and was placed in a medically induced coma for her own safety, with her family told to “expect the worst”.

While this was happening, Kirsty, who was unconscious, claims something “magical” happened and soon, she was “brought back” to life.

After finding her, Stu put her on the floor and attempted to save her.

She said: “He put me on the floor and started CPR while on the phone with the emergency services and after plugging me into various machines, the first responder used a defibrillator to shock my weak heartbeat into rhythm.

Most read in Health

“Unfortunately, after stabilising me, the same thing happened again and my heart was beating so fast that it would have eventually stopped and given up.

“The first night was crucial and it wasn’t looking good, where Stu was told he should prepare for me not making it – but he wasn’t having any of it.”

The next day, Stu insisted on seeing her via video call and told her that once she pulled through, they would get married.

Kirsty said that night, she was in A&E and was put in a coma, in order to stabilise her heart.

I realised you don’t die, only your body moves on and that my mission here wasn’t over yet

“She said my spirit was in her front room and I was asking her to write lists for my boys and dad.

“My sister told her I was in the hospital fighting for my life and apparently, I was there for over two hours.

“I told [my friend] that my body was breaking down and I didn’t think I could back get into it, but she got stern with me and told me to go back.

“Meanwhile, in the hospital, my family were being told to prepare themselves for the end.”

While she was in the coma, Stu wanted to do all he could to help.

Because of her past, Stu got in contact with meditation groups and spoke to friends that Kirsty claims ‘started off a wave of healing work’.

She said: “People around the world were plugging in to pray and meditate, I even had a Rikki master working for hours and supporting my return to my body.

“His faith and ability never wavered, even when being told the prognosis still wasn’t looking any good – but he remained confident that I was coming home.”

The next morning, medics decided to bring Kirsty out of her coma and monitor her progression.

She said: “I came around and instantly, I asked for Stu.

“I began to cry overwhelmed and although they never got to the bottom of why this happened, I had become medical researcher.

“There’s only one other case like mine where the person survived with rarely any issues.”

After a few days, Stu popped the big question as promised and now, the pair have relived the ordeal, where they’ve recognised other “unknown” factors helped her to survive.

Kirsty said: “My fiancé being called to help a client, but as he turned off to meet them, a stranger came to help and he was no longer needed.

‘If he had gone, I wouldn’t be here today.

“I recall upon finally coming back in to my body, that I knew exactly what I needed to do to heal, like a download of information.

“I realised you don’t die, only your body moves on and that my mission here wasn’t over yet.

“Without the dark, you don’t know what light is and I believe we’re here to wake up, grow and refine our vibrations.

“Everyday I mediated and imagined a white golden light flowing through the cells of my body – people would laugh when I would say: ‘I know I may have just had a near death experience, but I’m fit and healthy’ – I knew what I was doing.

“I sped up the inevitable and healed faster, where on day ten, my lungs were x-rayed and the radiographer stood in shock.

“He asked my permission to show the results to his team and he was flabbergasted, as the scarring and water had practically gone.

“I told him I healed my lungs and he asked how, so I shared my story. I left feeling elated and excited about my recovery.”

Now she is sharing her story in order to help others who might struggle with anxiety.

The 3 Guys Who Killed Lucky Dube, The Reason For Doing It & What Happened To Them