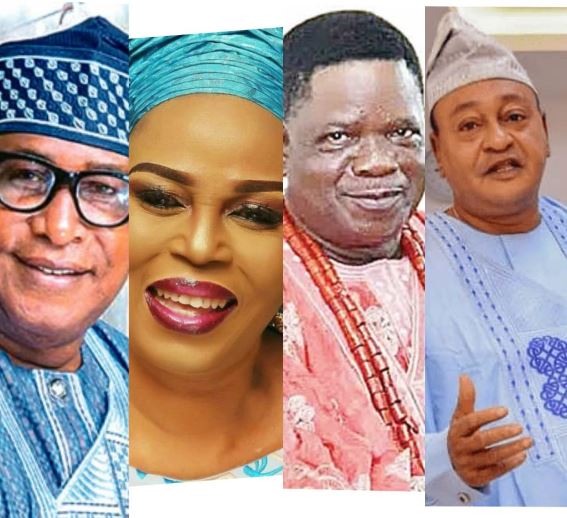 I have no regrets being Nigerian –Oyewo

Speaking on the current situation of the country, he said, “Nigeria can get better if the populace decides to bring people of integrity to lead us.” On the notable shows he watched while growing up, the actor said, “I watched Kola Ogunmola’s ‘The Palm Wine Drinkard’, Duro Ladapo’s ‘Oba Koso’, some of Baba Sala’s comedy, as well as Hubert Ogunde’s plays.”

He also spoke on what propelled him to join the entertainment industry then, stating, “Whenever we had a vacation in secondary school, I would join my uncle, who had a drama group called, ‘Oba Dramatic Society’, where we went to act in neighbouring towns and societies. By the time I finished secondary school, I joined Ogunlade Theatre and that was how I started my career in acting.”

On the notable changes that have happened in the Nigerian movie scene from then till now, he said, “When we started, we improvised a lot and plays were not scripted. The director would just tell us the story and paint a scenario for us and we would put our lines. We later started acting on television where we used to sing most of our lines.

“The people who worked at the TV stations told us to stop singing and be natural about our lines. So, we started deleting the singing aspect and said our lines instead. Also, when we started, there were no facilities to enable people to watch a playback. We would be playing and people would watch us at home.

“Later, we developed to the stage where we could record and play it later. Subsequently, film was introduced and we started taking part in celluloid films. However, video films took over because the cost of producing celluloid films was too expensive and that is how it has been evolving till today.”

Veteran actress, Toyin Afolayan, aka Lola Idije, has said unlike before, Nigeria’s Independence Day celebration is no longer interesting.

In an interview with Saturday Beats, she said, “There has been a lot of difference in Independence Day celebrations. In the past, the celebration was an interesting one. Then, workers would not go to work and we would move around greeting one another.

On what she thinks about the country’s progression from independence till date, Afolayan said, “There has been civilisation unlike in the past when there was no social media. However, its progression has some negative impacts, which I pray that God should help us solve.

“The progress in the industry for me is in the area of production. We produce quality movies now, unlike before when everybody wanted to be producers. To produce a movie now, a good location, beautiful costumes and nice cameras are needed. However, in the past, that was absent; all we were after was educating people through our movies. I feel the government can be of help by giving grants and putting in place adequate censoring for our films.”

She also decried the increasing rate at which people desire wealth, which had affected the razzmatazz that come with Independence Day celebrations.

“Everyone has become a boss of their own; people who were in the boys’ scout and girls’ guild in those days were seen as worthy people and their mates would also crave to be in their position. Nowadays, people are after money. A 15-year-old child, who is supposed to be tutored, now believes he has grown and that his mates own a car,” Afolayan stated.

She also advised Nigerians to embrace peace, shun vote-buying and allow people to exercise their civic responsibility by voting for candidates of their choice.

“We shouldn’t vote for money but for our future and that of our children. We shouldn’t fight or cause confusion. People should be allowed to exercise their right and vote for whomever they want because we all are one,” Afolayan added.

Veteran actor, Jide Kosoko, has said he is positive that Nigeria will become great again. In an interview with Saturday Beats, he said, “I love that we remain a nation, our cultures are interwoven and we are married to each other despite all the odds we face.”

On the level of growth the nation has experienced since independence, he said, “I agree that things are not the way we expected them to be. Also, the government has not prepared for the continuous increase in population to ensure that every aspect of life is taken care of.

“Nevertheless, we have every reason to thank God for remaining a nation even though there are a lot of problems here and there. Let us be hopeful that our country will get its proper footing, especially when we put the right peg in the right hole.”

Recalling the Independence Day mood in 1960, the actor said, “That was the year I started primary school and it was called ‘infant one’ then. We were asked to hold the Nigerian flag, while the older ones stood in front of us.

“As an entertainer, back then when Independence Day celebration was approaching, we used to have a lot of activities. We took entertainment to the Bar Beach, Lagos, and various places where people gathered to celebrate and enjoy different acrobatic and masquerade displays.

He also spoke about the growth of the entertainment industry in the country, noting, “We are not doing too badly. Although when we started, the money we made wasn’t as much as what is being made or expected now, but we were happy doing it because it was more about passion. We built the industry gradually and I am happy the industry is growing, whether we like it or not. We are contributing positively to the economy of the country.”

He also spoke on the forthcoming elections, saying, “I will advise people to remain calm and let everybody choose whoever they like as their president. We should not fight nor quarrel over it and we should respect each other’s opinions.”

Veteran actor and filmmaker, Adebayo Salami, aka Oga Bello, has said no matter what happens in Nigeria, he will not leave the country. He told Saturday Beats, “When I think of Nigeria, what comes to my mind is that Nigeria is my home and I will remain here no matter what. What Nigeria is going through is normal because we are facing global problems like many other countries.”

He also expressed optimism about the future of the country, saying, “Nigeria will get better. All we are going through now, the United States and Britain had gone through it in the past. So, we will also get there.”

On the song that comes to his mind whenever he thinks of Nigeria, he said, “Nigeria yi ti gbogbo wa ni (Nigeria belongs to all of us) by King Sunny Ade and other artistes.”