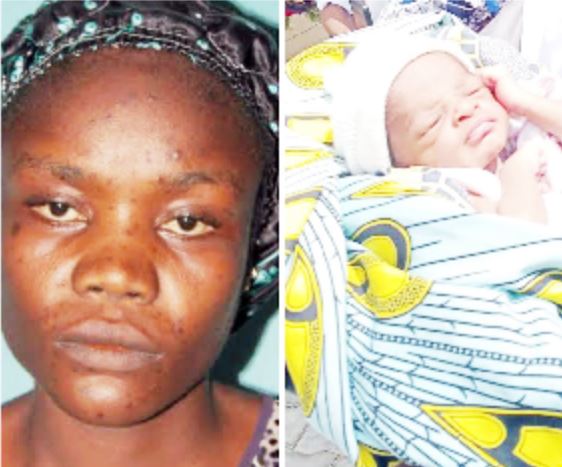 Without a doubt, nearly every woman on earth wants a baby. Of course, the dream of every married woman is to have at least a child she can look after and call her own.

But some women like Sukyama Irmiya, a 30-year-old woman who stole eight days old twin babies at the Abubakar Tafawa Balewa University Teaching Hospital Bauchi may not have a baby due to infertility.

In African societies as is tenable in Nigeria, barren women encounter a lot of difficulties due to their natural inability to bear a child. Marriages suffer and, in extreme cases, divorce occurs.

Sukyama’s woes began when her husband decided, after being pressured by family members and friends, to show her exit door over her infertility despite spending years as a couple.

Troubled by her newfound misfortunes, the barren woman who hailed from Kanam, a local government in Plateau State, decided to consult a physician at the Bauch Teaching hospital hoping to find medication for infertility to enable her to bear a child for her beloved husband to not only safer her over 20-year-old marriage from collapse.

However, she changed her mind after visiting the hospital knowing she would never bear a child alone.

“I came to Bauchi to see a Doctor and from there I went to the Teaching Hospital (ATBUTH) to see a Doctor but I later changed my mind because of the condition I found myself in.

“I thought that even if I met the Doctor, it is all about childbearing and I don’t have a husband because I have been chased out of my marriage because of my inability to give birth to a child for my husband, so there’s no hope of a childbearing,” she said.

Sukyama became more determined to have a child by all means. She failed in her attempt to adopt a child. She said, “I had tried adopting one but I couldn’t get one because there was no infant child available at the orphanage I went to. I did not do it with any ulterior motives, I just want a baby so that I too will be called a mother.”

LEADERSHIP Weekend gathered that the suspect spent a good time establishing a good rapport with the mother of the baby before she finally stole him.

“I went into the ward and stole the baby. I stole the baby because I want a baby. I want to take care of the baby as my own child, and that was the reason I went for a newly born baby.

“I went into the hospital confidently, entered the ward, and met the woman, I engaged her in friendly conversations and she loosened up with me.

“I asked her if she had twins and she answered yes, I then asked her, now that you are sick, how are you breastfeeding the children, she told me that she was giving them milk. I asked her if she could take me to see how he looks, and she allowed me to do that.

“Immediately I took the baby, my heart told me to act as the mother and go, I then told her that I was coming and I just left the hospital and went away with the baby. I followed the main entrance to the main road and boarded a Keke and went to the village called Za’a in Kanam LGA,” she explained.

Commenting on the issue, the ward head of Buzaye Malam Adamu Haruna, a grandfather to the stolen twin baby said “The woman spent days visiting the hospital interacting with the mother of the missing baby before taking advantage of her.”

He said after she stole the baby, Sukyama ceased to be sighted again in the vicinity of the Maternity Ward.

However, barely a week after the crime, she was arrested with the baby in her country home following careful intelligence gathering by operatives of the Department of State Security Service (DSS).

Speaking with LEADERSHIP Weekend the father of the stolen twin baby, Muhammad Khalid, a 30-year-old resident of Buzaye, a community on the outskirt of the Bauchi metropolis, said the suspect took advantage of the ill health of the mother of the baby.

“The mother of the stolen twin baby suffered from serious hypertension which has affected her mental health,” he said.

Khalid felt greatly traumatised when he learned that one of his twins’ babies was stolen.

He said the security architecture of the Abubakar Tafawa Balewa University Teaching Hospital needs a critical review to guarantee the safety of both patients and those providing healthcare services to them.

“Security checks at the hospital need to be strengthened to avert the future reoccurrence of such incidents.

“The rate at which people easily enter and exit the hospital has security implications and criminal elements can easily penetrate to carry out their mission,” he said.

The chief medical doctor, Abubakar Tafawa Balewa University Teaching Hospital, Dr Haruna Liman, said surveillance cameras have been installed at the Emergency Unit of the hospital to monitor and check the movement of patients and their relatives in and around the facility.

The CMD, however, lamented that surveillance cameras only provide images for forensic analysis in retrospect.

Without supplying additional details, Dr Liman said the management of the teaching hospital is working to institutionalise a security system that tracks and monitors the movement of people as well as what they carry along with them.

“We want to put in place proactive measures that will even prevent a criminal from leaving this hospital with a baby that is not his or hers.

“We are working towards having a security architecture that will ensure any lady leaving this facility must be cleared by the security operatives before she leaves,” the chief medical director said.

Yul Edochie Caught In More Drama As Second Wife’s Ex Husband Surfaces, Says She Has Been Dating Yul Since 2012