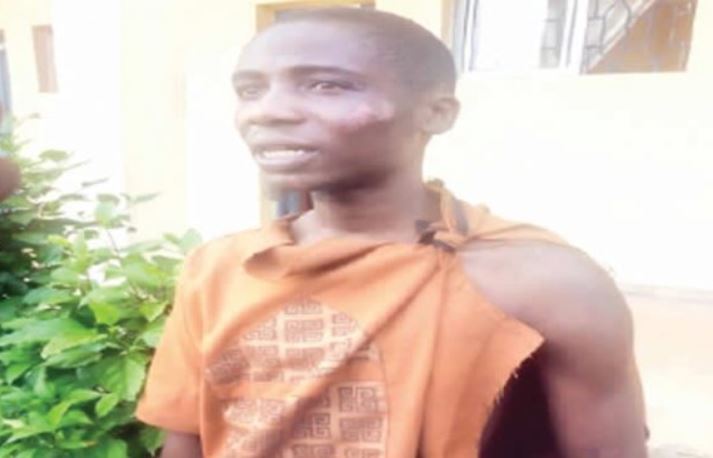 Abdulafeez Shorinade, a 23-year-old suspected drug addict, has been arrested by law-enforcement officers.

The man, who was apprehended in Iwo, Osun State for allegedly stabbing a lady to death and inflicting injuries on another , opens up to BOLA BAMIGBOLA on his actions

What is your name, age and occupation?

I am Abdulafeez Shorinade. I am 23 years old. I am a barber based in Iwo, Osun State.

What brought you to police detention?

I attacked two persons with a pair of scissors and one of them died.

How did the incident happen?

The day the incident happened, I was at work. I am a barber and I have a shop. I learnt the vocation after I left Arabic school. I spent about nine months at the Arabic school after which I returned to my boss to complete my training as a barber. Initially, I was enjoying my job, it was very pleasing, but later, things started to get boring for me. I used to pray very well.

What happened on the day you attacked your victims?

What happened that night was that I was sleeping at my shop, and suddenly, I woke up. I started having some strange feelings as if a spirit wanted to come out of me. So, I went to a mosque to pray. After praying, I decided to return to my shop. On my way back to the shop, I saw a pair of scissors by the road. Before then, I had been having some strange feelings. One voice directed me to pick up a broken bottle lying by the road and I picked it. The broken bottle was in my hand when I also found the scissors. When I took the scissors, it appeared to me exactly like the praying mat that I was carrying. So, I took it. It was already getting dark. I saw a lady walking along the road and moved close and I stabbed her and ran away.

Still, the strange feelings didn’t leave me. The voice was still giving me orders and I could not resist it. I was still holding the broken bottle and the scissors. Later, I saw another lady coming towards the route I was to pass. I followed her and I noticed that people were not around the place; so, I also stabbed her with the scissor and fled.

When did you start hearing this voice commanding you to attack people?

I came to work in Iwo after my Arabic schooling. I grew up in Lagos. I started having the strange feelings, hearing the voice since year 2020. I went to visit one of my cousins in Ikotun, Lagos. His family members were attending a white garment church and I went to their house. Back then, I was still living with my parents and I used to move around with a group that had a bad influence on me. My group members used to smoke Indian hemp. My parent were against this. My cousin’s parents were operating a healing home and a church. I went to the place for treatment.

Did you smoke Indian hemp the night you stabbed the ladies?

Do you always hear this strange voice whenever you smoke Indian hemp?

Indian hemp attracts the strange feelings whenever I smoke it. I will be hearing voices directing me to do things.

Did you inform your parent or anyone about it?

Some people I tried to tell insulted me. They would say it was because I smoked Indian hemp but I used to hear the voice even without smoking.

Why did you stop schooling?

I went to Arabic school last year. But I stopped going to school after my O’ Level. I was trying to help myself. The moment I told my parents that I wanted to ‘hustle’ after my secondary school, they abandoned me.

Where are your parents now?

They are in Lagos.

How were you arrested?

In the case of the first person I stabbed, I ran away. The second one, when I was about to flee, I heard the voice again telling me that I must not run. The moment I heard that voice, I was confused and waited and then I went back to the scene.

Since you were arrested and have been in detention, have you heard the voice again?

No; I have not been hearing the voice.

Why didn’t you stop smoking Indian hemp, since you know you always hear this strange voice after smoking?

I don’t know why.