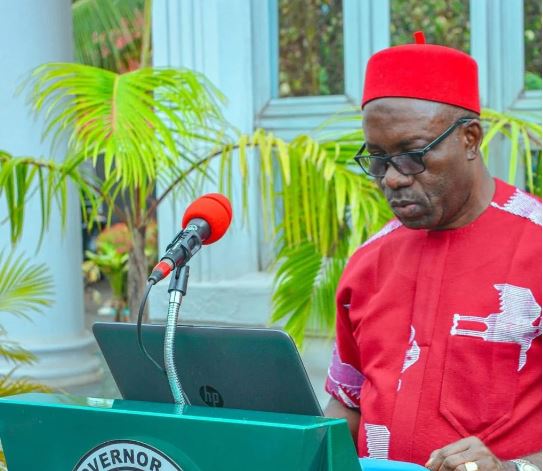 Prof. Chukwuma Soludo, the Anambra State Governor, has made a new revelation about gunmen who tried to kill Senator Ifeanyi Ubah.

He revealed that some of the gunmen who participated in an assassination attempt on Senator Ifeanyi Ubah have been arrested.

Soludo revealed this on Friday when he visited Enugwu-Ukwu in Njikoka Local Government Area of the state, the same community where the attack happened about a month ago.

Ubah had lost four security aides and two personal assistants during the attack, but he was able to escape in his bullet proof car.

But during the burial of Pa Boniface Nwankwo, father of Hon. Dozie Nwankwo who represents Dunukofia, Njikoka, Anaocha federal constituency in the House of Representatives, Soludo announced that the culprits have been arrested, and that security operatives were on the trail of the other members of the gang who were at large.

Soludo said: “Three weeks ago, it was in this same community that some elements choose to attack Senator Ifeanyi Ubah. I want to tell you that we have arrested a number of those involved in that attack. We are still on the trail of the remaining people.

“We will not let people like that define who we are. This is Anambra State, and we are peaceful people. We must embrace peace, even in the coming election. Anambra is peaceful, Anambra is safe.

“We have chased away bad elements in the state. The pockets of crime you hear of are just a small number of the bad elements left. They will not disappear in one night, even in civilised places, they are still few bad elements.”

Soludo who joked with one of the sons of the deceased, Hon Dozie Nwankwo who is a senatorial candidate said: “Dozie, all the people you are running for Senate against are here, so who will leave the contest for the other? We are Anambra people, and violence doesn’t define us. Irrespective of party, we will remain brothers and sisters, and we always come together like this to support one another.”

The governor eulogized the deceased, saying he lived a good life, a long and impactful one too, having died at the ripe age of 83.

Dozie Nwankwo in a speech thanked all who graced the burial, confirming that despite political differences, political players in the state are peaceful and see each other as their brothers.

Other guests who joined the bereaved family to eulogize the deceased included wife of the president, Mrs Aisha Buhari who participated virtually during the burial mass; former Rivers State governor, Rt Hon Rotimi Amaechi; senators Victor Umeh, Uche Ekwunife, and many other dignitaries.