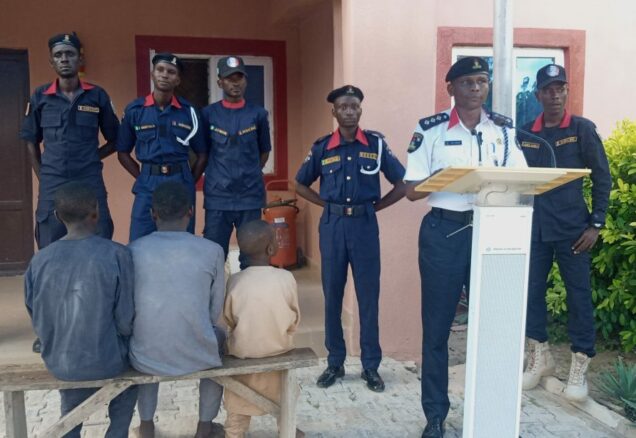 PM News reports that a gang of three persons who steal from people in Katsina State have nabbed.

The gang who allegedly specialised in ransacking women’s bags to steal valuable items during social gathering in Katsina have been arrested by operatives of Nigeria Security and Civil Defence Corps (NSCDC).

According to him, the gang uses its youngest member, aged 10, to go into houses where wedding or other ceremonies are taking place to steal valuables from women’s bags.

The spokesperson added that the gang used a tricycle to comb the town for homes to attack.

“The 19-year-old suspect is the one riding the tricycle which they normally use for their operations.

“While a 10-year-old boy, whom they normally give clean clothes and even wireless earphones, is used to enter any place where an event is going on, especially wedding or naming ceremony.

“Because he dresses very clean, people will think he’s an innocent boy and part of the ceremony.

“He then use the opportunity to search women’s bags and go away with their phones and other valuables,” he added.

According to Abdara, when he succeeds in getting anything useful, he hands it to his 16-year-old accomplice, who will rush out to where they parked the tricycle.

“Unfortunately for them, the little boy was caught at a wedding ceremony, which led to the arrest of the other two suspects while trying to escape.

“The tire of the tricycle got spoilt and they were all arrested,” he added.

The NSCDC spokesman said that in the course of investigation, the suspects allegedly revealed the identity of a similar gang operating in Katsina.

“For the little boy, we have informed his parents since Sept. 30, but up to now we have not seen any of them. At the end of the investigation, the boy will be taken for counseling.

“The other suspect that claimed to be 16 years old, we are still investigating, if we find he is 18 or beyond, we are going to prosecute him together with the 19-year-old suspect,” he said.

Abdara called on parents to always watch the movement of their children and the kind of people they mingle with, so as to insulate them from criminality.