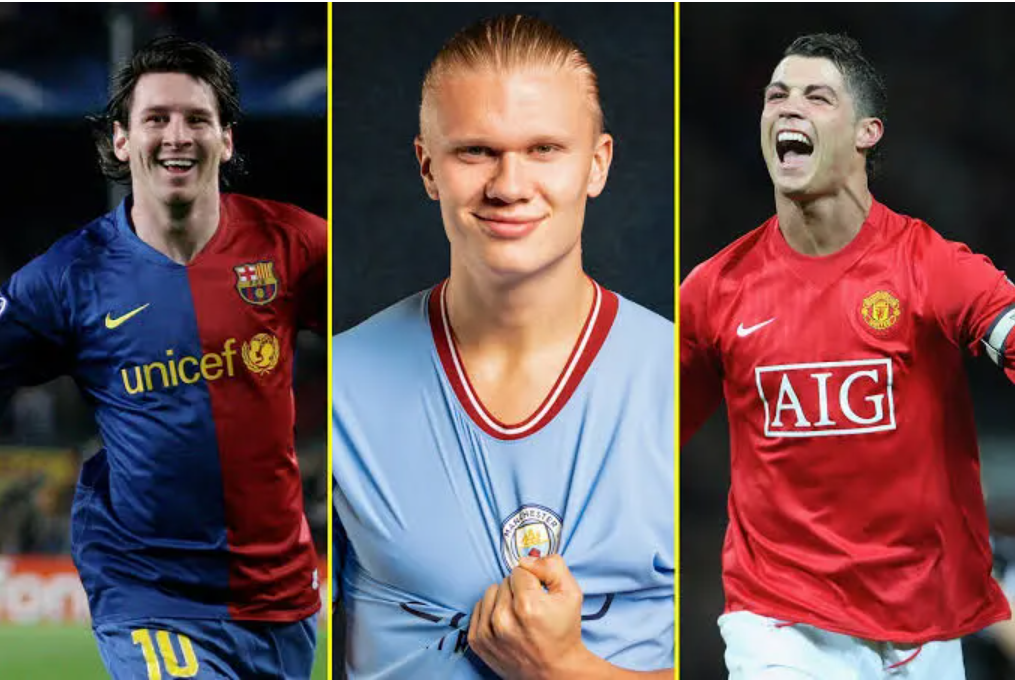 Erling Haaland of Manchester City has scored more goals than Cristiano Ronaldo and Lionel Messi at 22. The prolific ace has outscored and nearly doubled the total goals scored by Ronaldo and Messi put together at 22.

Cristiano Ronaldo and Lionel Messi are the game’s greatest icons in the modern era. The duo has dominated the game on almost all angles, bulldozing old records and setting new ones.

However, it seems another upcoming legend is on a mission to redefine the game, set new benchmark and create new records.

Another surprising slant to the Erling Haaland gait and statistics has shown that the youngster is far outperforming the two great stars of the game at 22.

From the records, Cristiano Ronaldo made waves at age 22 while playing for Manchester United. He scored 50 career goals.

Lionel Messi, playing for Barcelona at 22 was also a top and promising youngster. He scored 44 career goals at 22.

Manchester City striker Erling Haaland is definitely on the route to becoming the most deadly and feared striker after he had banged in an incredible number of goals in his football career.

At 22, Erling Haaland has scored 170 goals, already outnumbering both Lionel Messi and Cristiano Ronaldo at 22, whose tally is 94 when added together.

Erling Haaland’s goal-scoring record is astonishing. Starting from the Norway U-15, Erling Haaland has scored at various levels of the Norway youth team, except Norway U-21, in which he made three appearances.

As a teenager, Erling Haaland became the first young player to score in five consecutive Champions League matches in the 2019/20 season.

Another top moment in Erling Haaland’s scoring spree was in the 2019 FIFA U-20 World Cup. Haaland emerged as the top scorer in the tournament, becoming the first player to score nine goals in a single competitive match.

Haaland is one of the strikers that always score more goals than the number of their appearances for a team. His prolific goal-scoring form started at Bryne 2, where he made his first professional senior career appearance between 2015 and 2016.

At Bryne 2, Haaland scored 18 goals in just 14 appearances. But he saw a dip in his form when he joined Bryne’s main team in 2016, making 16 appearances without a goal.

The Norwegian youngster regained his prolific striking prowess after moving to Salzburg in 2019. Erling Haaland outscored his number of appearances at Salzburg, scoring 17 goals in 16 appearances.

At Borussia Dortmund in the Bundesliga, Haaland scored 62 goals in 67 matches. At Manchester City, Haaland has played seven matches so far and has scored 11 goals, including a back-to-back hat-trick which earned him Premier League Player of the Month of August.

The Manchester City sensation is arguably on a cause to bulldoze and set a new record in the game.

Cristiano Ronaldo and Lionel Messi are still football’s greatest stars. But as it stands, Erling Haaland is the emerging new force to reckon with in the game.