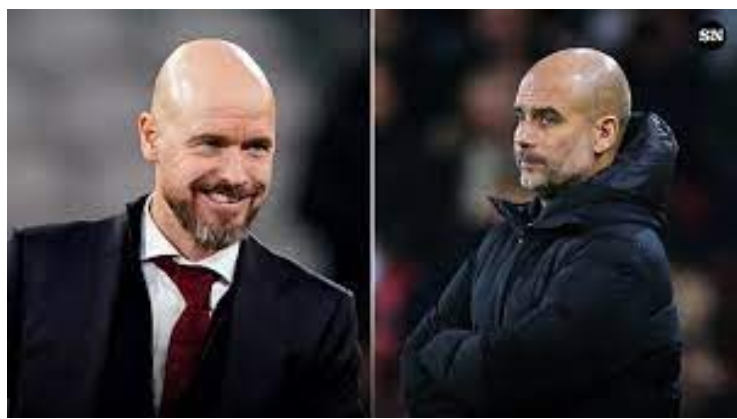 Former Bayern Munich II midfielder Tobias Schweinsteiger has backed his old boss, Erik ten Hag, to hold his own in the tactical battle against Pep Guardiola in Sunday’s Manchester derby.

Manchester United travel to the Etihad to face Manchester City with wins against Liverpool and Arsenal to their name, and confidence will be high after winning their last four consecutive Premier League matches. But getting the job done against the reigning champions, who are yet to taste defeat this term, will be anything but straightforward.

The crunch clash will see Ten Hag and Guardiola lock horns for the first time on these shores – almost a decade on from their stint working together at Bayern Munich. Ten Hag coached Bayern’s second team while Guardiola was at the helm in Munich and it is well known that there is a strong level of mutual respect between the pair.

Schweinsteiger, who is the brother of ex-United midfielder Bastian, knows both coaches well from his time in Germany – and he is anticipating quite the tactical battle on Sunday.

“I think the coaches are both quite the same,” he told Manchester United’s official website. “They’re both football coaches who are really good at the tactical aspect, have really good impact on the team and are very good at details and at analysing the other teams and finding solutions against them.

“It’ll be interesting who plays more football and I was very positive about United’s match against Liverpool. They didn’t play the goal-kicks short, they played long balls and went for the second balls. Against one of the best pressing teams, for me, this was a good coaching plan from Erik. Don’t play the goal-kicks short because Liverpool like to press high. I think there were 12 or 13 goal-kicks so 12 or 13 possibilities for Liverpool to press and win the ball. They didn’t give them the opportunity to press.

“So I am looking forward to seeing which small things the coaches will change in the match against each other.”

And while Schweinsteiger stressed that United will have to be wary of the irrepressible “striking machine” that is Erling Haaland, the 40-year-old, who is now head coach of Osnabruck in the German third tier, believes that Ten Hag’s side are capable of doing damage of their own.

“I can imagine United could play a bit more defensively and go for counter-attacks,” added Schweinsteiger. “They did really well with counter-attacks in the last matches so I think this could be a big chance, especially with Marcus Rashford. I think he played really good matches in the last weeks and, if you can counter with him, he could be a weapon in this game.

“I saw a lot of things from Erik that I remember, especially in the training sessions, but we didn’t counter so much and do so well in the transitions after winning the ball. I think that can be a part where he can be working on with the team in the last weeks as that looked like they had trained more on this than we did in the past, on the transitions.

“I think it’s at City so United could play a little bit more defensively, like I’ve said, and looking to control the weapons from City and play a bit more on the counter. I think City will play forwards as it’s at the Etihad and they are favourites but I think, in that role, United have been really comfortable this season.”

Keown explains why Arsenal still “behind” Tottenham as he highlights difference