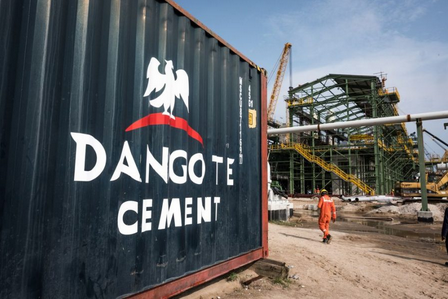 Dangote Cement Armed Vigilantes Shot 27 Workers, Destroyed Company’s Property In Kogi State: The Group Managing Director of the company, in a statement, said the armed vigilantes were assisted by some officials of the state government.

Dangote Cement Plc has spoken on the invasion of its facility in Kogi State.

The company, on Friday, said that the invasion of the facilty, which was carried out by armed vigilantes, led to the destruction of some of the company’s property.

The company also alleged that 27 workers were shot by armed vigilantes.

The Group Managing Director of the company, Michel Pucheros, in a statement on Friday, said the armed vigilantes were assisted by some officials of the state government acting on the resolution of the Kogi State House of Assembly on controversial tax claims to carry out the offensive act

AMBA JAY recalls that the Kogi State Government on Wednesday had sealed the plant, formerly owned by the state government, on the allegation that it was improperly acquired by Dangote Industries Limited, the parent company of the cement giant.

The state Commissioner for Information and Communication, Kinsley Fanwo, in a statement, said the state government sealed the factory in Obajana following agitations by Kogi indigenes on the questionable circumstances surrounding the acquisition of the company.

But, Michel Pucheros, the managing Director said in a statement that Obajana cement plant is 100% owned by Dangote Cement Plc, adding that steps have been taken to arrest the vigilantes who carried out the invasion.

According to him, in the process of forcefully evicting workers to enforce the shutdown, “the vigilantes shot at 27 workers and also destroyed some of the company’s property at the plant,” he said.