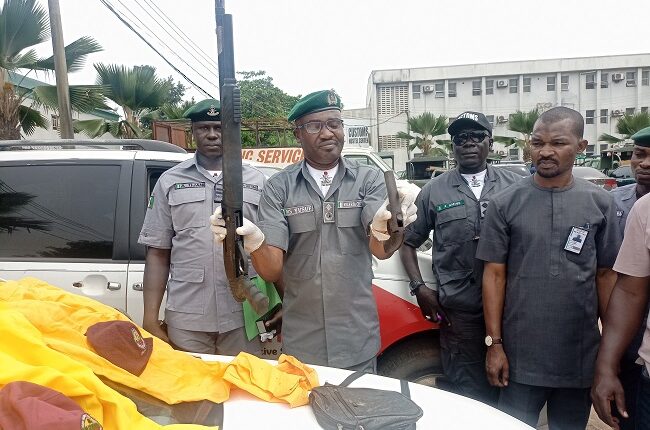 This is even as the Strike Force revealed that the Pump Action and locally fabricated pistol were discovered in a vehicle that was chased from the Lagos Airport road to Alaba International in Ojo axis.

Addressing journalists in Lagos, Controller of the CGC Strike Force Team A, Mohammed Sanni Yusuf explained that in the area of revenue, the sum of N748,679,337 was made thorough documentary checks and issuance of demand notices on consignments that were found to have been short-paid.

According to Controller Mohammed Sanni Yusuf, “In continuation to suppress smuggling and to prevent revenue loss within the South-West Region, officers and men of the Strike Force Team ‘A’ have remained resolute in enforcing Customs extant laws.

“In the course of enforcing these laws, recalcitrant importers and traders were either made to pay the maximum duty payable, through the issuance of demand notices or made to forfeit their goods to the Federal Government by way of seizing them.

“You may recall that foreign tomato paste, used clothing, importation of vehicles through the land borders, used tyres, arms and ammunition without end-user certificates among others, are all import prohibition which threatens our collective economy.

“For the Pump Action and locally fabricated pistol and Live Cartridges, they were discovered when my men chased a vehicle from the Airport Road near NAHCO to Alaba International in Ojo area. When the drivers of the vehicle got to a dead end where trailers and other articulated vehicles were blocking the road, they opened the doors of the vehicle, jumped down and ran away. A thorough search of the vehicle revealed one Pump Action and a locally fabricated pistol with 14 rounds of Live Cartridges.

“The entire seizures recorded within the period have a cumulative duty paid value (DPV) of N390,198,000.

“Illicit goods imported into the country with their attending effects mostly end up either in our homes or in the neighbourhood; causing a wide range of issues ranging from social to psychological crises.

“Our efforts at ensuring that the local industries are Protected from unhealthy foreign competition and other forms of social security require a strong partnership between our operatives and members of the public in areas of information sharing and moral support.

“In the aspect of revenue, the sum of N748,679,337 was made thorough documentary checks and issuance of demand notices on consignments that were found to have been short-paid.

“It is sad to note that some Nigerians would pay all duties and levies payable to the Customs authorities of other countries they import from, while on the other hand, they make conscious efforts to evade such payments into the federal coffers.

“As we are in the last quarter of the year; approaching the yuletide period, where recalcitrant traders and importers quest to make more profits through smuggling is at its peak; I would use this opportunity to appeal to importers and agents to be patriotic by making sincere declarations, and pay their duties accurately.

“Let me use this medium to warn none compliant traders to desist from such because we have strategically mobilised, and deployed our personnel to do the needful. I wish to reiterate at this point that, unpatriotic importers/agents culpable shall be dealt with in accordance with the dictates of the law.”

There Won’t Be Ballot Stuffing, Snatching In 2023 Election —INEC