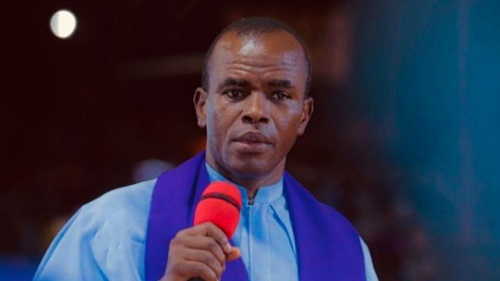 The Catholic Church has revealed what will happen to Father Ejike Mbaka, the spiritual Director of the Adoration Ministry, Enugu Nigeria, AMEN when he returns from the monastery.

According to the church, Mbaka’s posting to the monastery is not permanent.

The Church said Mbaka will return after observing moments of solitude.

The clarification followed protests that had greeted Mbaka’s announcement of his replacement during a mass on Sunday.

The Catholic Church has revealed

He had told his followers that Rev. Fr. Anthony Amadi has been appointed his replacement as he proceeds to the monastery.

The development sparked protest from the adorers.

In a statement issued on Monday by Umoh, he said Amadi would oversee the ministry in the interim.

While quoting Director of Communications, Enugu Diocese, Rev. Fr. Benjamin Achi, the CSN Spokesman said “it was recommended that Fr. Mbaka takes time away in solitude, in order to listen to what the Spirit of God has to tell him, he was allowed to propose a priest to administer, in the interim, to the faithful at the Adoration Ministry.”

He added that what every true Christian, and especially every true Catholic, should do at this moment “is to commit our dear brother and priest, Fr. Mbaka, to God in prayer so that he may, through this moment, encounter God specially, come out stronger and better in recognizing His will for him and gain more graces to channel those rare gifts for His glory and for the sanctification of the people of God and society at large.”

He would be away till early next year.

Before he announced his replacement on Sunday, he had told the congregation that he knew solutions to Nigeria’s problem with regards to the 2023 general election but that he was restrained by God not to reveal it.

He went further to say that some unnamed persons were wasting their time.