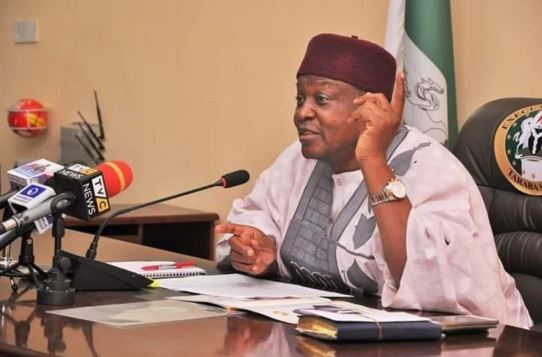 Darius Dickson Ishaku, the Governor of Taraba State has been booed.

The man was on Thursday booed while in Donga local government council to coronate and present the staff of office to the Gara-Donga of Donga, Sanvalla Varzoa Shimbura Gargbanyi ( ll).

Ishaku was booed when he stood up to pay homage to former Minister of Defense, Theophilus Y. Danjuma.

Armed with placards with various inscriptions, the crowd, who kept on booing the governor, said they were fed up of his administration and vowed not to align their weights with him anymore.

It would be recalled that the representative of Ishaku was also recently booed in Jalingo, the state capital, when he was denied the opportunity of addressing the gathering at a reception organized for the former governor, Jolly T. Nyame.

Waving posters of opposition candidates seeking elective positions in 2023, the crowd who were chanting “bamu so, bamu yi” meaning we are no longer interested, expressed sadness at the governor’s failed promises.

Citing the alleged failure of the governor to address the hardship in the state and his refusal to pay university lecturers following their involvement in the just suspended Academic Staff Union of Universities (ASUU) strike among others, the crowd vowed to frustrate him from actualizing his senatorial ambition come 2023.

The governor was alleged to have earlier been chased out of Wukari on Wednesday night by the angry youths who vowed not to allow him to pass the night there.

Among the allegations observed to have been levelled against him by youths in Wukari, includes embezzling state funds, mortgaging the state through huge debts and general bad governance.

It was also gathered that because of the tension that enveloped Wukari on Wednesday night, Ishaku had to relocate to Takum town in Takum local government area of the state for safety before returning to Donga on Thursday for the programme.