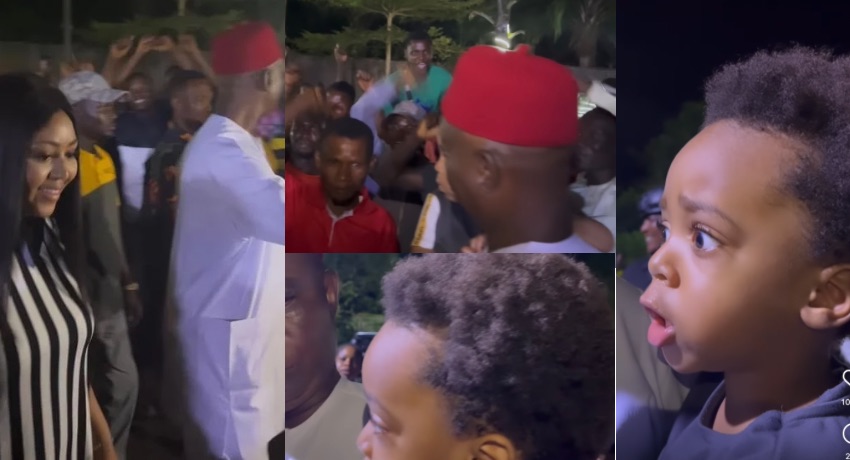 Nollywood actress Regina Daniels and politician, Ned Nwoko’s son, Munir Nwoko has joined his parents to campaign for his father who is the Peoples Democratic Party’s candidate for the 2023 Delta North senatorial election.

Regina Daniels shared a video on Instagram where the two year old boy who was carried by Ned is seen chanting the PDP slogan to the people who were in attendance.

Responding to his chant, the people replied, “Power to the people.”

“Mount Ned in Idumuje Ugboko is a home for all. This is the usual crowd at most hours. The gate of mount Ned is always open to the people.

“It is a place where men, women and youths of Anioma meet to demonstrate their constant support. I am always available to provide support and advice to the people.”

Earlier in November, the 22-year-old shared on Instagram a video of two-year-old Munir aka Moon greeting some members of the PDP in Delta State who paid a visit to his dad.

In the video, the boy who joined his father in welcoming his guests could be heard chanting, “Power to the people” while they echoed: “PDP”.

As the boy continued chanting the words, the party members laughed in admiration of his boldness. See below:

Ned, who is 61 years old, and his wife have been on a ward-to-ward campaign to sell his candidacy to the people.

He is hoping to return to the National Assembly after representing Aniocha/Oshimili Federal Constituency in the House of Representatives from 1999 to 2003.

Not everything should trickle down to one’s ex – Davido’s baby mama, Sophia Momodu Replies critics