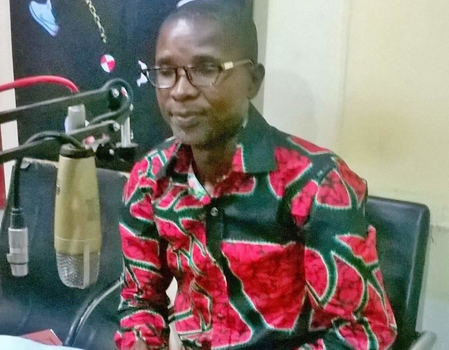 A Journalist Was Arrested For Listening To Song Abusing Uzodimma, Governor Of Imo:  According to the International Centre for Investigative Reporting (ICIR), Oyinyechi Uzomah, wife of Casmir, said her husband was arrested on August 4 for playing a song “abusing” Hope Uzodinma, governor of Imo.

Casmir Chinonye Uzomah, a Nigerian journalist has been reportedly detained b the Department of State Services (DSS).

Family members have now called for the release of Casmir, a staff of Orient FM/Television Station, following his alleged detention by the DSS.

According to the International Centre for Investigative Reporting (ICIR), Oyinyechi Uzomah, wife of Casmir, said her husband was arrested on August 4 for playing a song “abusing” Hope Uzodinma, governor of Imo.

Oyinyechi added that the journalist has not been released since then.

“They should please free my husband. I am not working, and my children need to go to school,” she said.

“My husband, Casmir was arrested on August 4 by the DSS in Imo, They said he played a song that was abusing the governor. I have not seen him since then.

“My sister-in-law called me on that day and told me that they have arrested my husband.

“She said I should take care of the children. His phone has not been going since then.”

Chidi Uzomah, brother of Casmir, said the journalist was “invited by DSS” due to a “query was issued to him by the Imo State Commissioner of Information Declan Emelumba”.

“Casmir is still in the DSS facility. He was invited by DSS on August 4 2022 after a query was issued to him by the Imo State Commissioner of Information Declan Emelumba,” he said.

“Reason is that he aired a Bongo music which was critical of the state government.

“Since then, he has been detained by DSS, and all efforts to release him have not worked.”

However, Emelumba was quoted as saying he was not responsible for the arrest of the journalist.

“I was told that he played a song on IBC which was very offensive, calling the governor a murderer,” the commissioner said.

“This man actually played a song that says the governor is a murderer and that blood is flowing in his hand.

“Even the NBC queried the IBC for playing such a song.

“I am not responsible for his arrest in any way; I was told he brought the song from outside and played it on the radio station. What is his motive for doing that?”

TheCable was unable to reach Peter Afunanya, the DSS spokesperson, to confirm the arrest of the journalist.

Like Loading...
Related Topics:A Journalist Was Arrested For Listening To Song Abusing UzodimmaGovernor Of Imo
Up Next