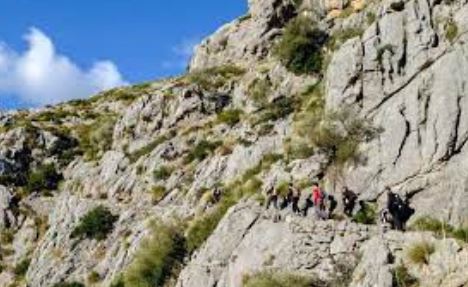 A 75-year-old woman hiking with a group of tourists fell to her death from a cliff path in Majorca on Sunday.

According to reports, the woman lost her balance and plunged more than 60 feet as she was out with the group of around a dozen other foreign hikers.

Police mountaineers and firefighters were among the emergency responders mobilised after the alarm was raised around midday on Sunday. But there was nothing they could do to save her life and her body was removed by a Civil Guard helicopter to a heliport at the island’s Inca Hospital.

It was gathered that the tragedy happened at Pas d’en Segarra.

The dead woman, who has not yet been named, is believed to have been hiking the five-hour Puig Roig circuit, a scenic long loop around the base of a mountain called Puig Roig in the municipality of Escorca in north-west Majorca.

A spokesman for the Civil Guard, confirming the incident yesterday, said: ‘A 75-year-old Irish woman died today after suffering an accident while she was doing a hike in the area.

‘The victim fell from a height of around 20 metres after losing her balance, suffering serious head injuries which caused her death in the place where she had her accident.’

A well-placed source added: ‘She was the oldest of a group of around 12 people who were all Irish. She hit her head when she fell and died virtually instantaneously.’

A post-mortem is due to take place in the coming hours and a routine investigation has been launched by a local court.

Keyamo Speaks On Perceived Disunity Between Tinubu And Osinbajo