In Benin State, 90% Of Parents Are Aware Their Daughters Are Dating Yahoo Boys And Are 100% In Support Of It – Edo Lady Claims

She said this after a Yahoo boy allegedly killed his girlfriend for suspected ritual purposes in Benin city on Christmas eve.

According to a lady from Edo state, most parents in Benin city are fully aware of their daughters being in relationships with internet fraudsters popularly known as ‘Yahoo boys’ and are in support of it as long as they give them money.

Ms Odigie said this on Tuesday, after a Yahoo boy identified as Osas, allegedly killed his girlfriend, Elohor Oniorosa for suspected ritual purposes in Benin city on Christmas eve.

“In Benin city, at least 90% of parents are aware that their daughters are dating Yahoo/ G- boys and they are 100% in support of it.”

In fact, most of the expensive weddings in Benin have young Yahoo boys as the groom…and you see the bride’s parent and siblings smiling “mumushly” when those yahoo boys starts their money spraying display.

If you listen carefully, you may even hear the bride and groom’s father shouting them get money!!!

The era where parents question their child’s source of wealth is long gone!

The era where parents question the source of wealth of their daughters’ suitors has totally faded out.

Parents asking their daughters’ suitors what they do for a living is now for mere formality and not because they are truly interested in how they amassed their wealth.

Sad…but this is our current reality.” 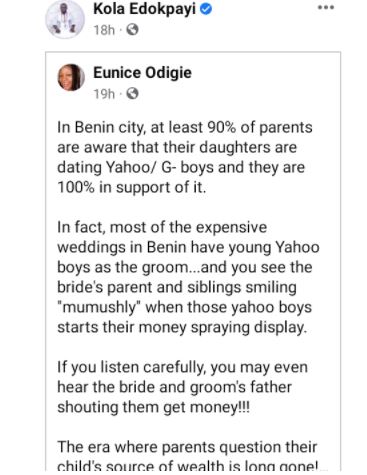 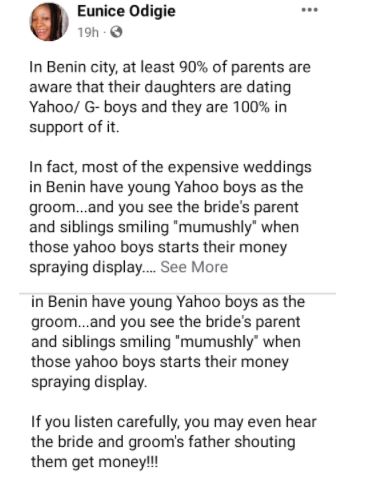 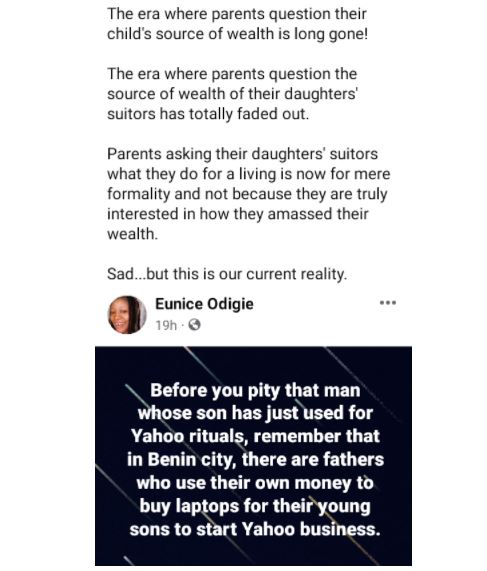